James Francis Cagney Jr. (July 17, 1899 – March 30, 1986) was an American actor and dancer, both on stage and in film, though he had his greatest impact in film. Known for his consistently energetic performances, distinctive vocal style, and deadpan comic timing, he won acclaim and major awards for a wide variety of performances. He is best remembered for playing multifaceted tough guys.

In 1999, the American Film Institute ranked him eighth among its list of greatest male stars of Classic Hollywood Cinema. Orson Welles said of Cagney, "[he was] maybe the greatest actor who ever appeared in front of a camera", and Stanley Kubrick considered him to be one of the best actors of all time.

James Francis "Jimmy" Cagney was born on the Lower East Side of Manhattan in New York City. His father, James Francis Cagney Sr. (1875–1918), was of Irish descent. At the time of his son's birth, he was a bartender and amateur boxer. His mother was Carolyn (née Nelson; 1877–1945); her father was a Norwegian ship captain while her mother was Irish.

Cagney was the second of seven children. He was sickly as a young child—so much so that his mother feared he would die before he could be baptized. He later attributed his sickness to the poverty his family had to endure. He was confirmed at St. Francis de Sales Roman Catholic Church in Manhattan, where he would eventually have his funeral service.

The red-haired, blue-eyed Cagney graduated from Stuyvesant High School in New York City, in 1918, and attended Columbia College of Columbia University, where he intended to major in Art. He also took German and joined the Student Army Training Corps but dropped out after one semester, returning home upon the death of his father during the 1918 flu pandemic.

Cagney held a variety of jobs early in his life, giving all his earnings to his family: junior architect, copy boy for the New York Sun, book custodian at the New York Public Library, bellhop, draughtsman, and night doorkeeper. While Cagney was working for the New York Public Library, he met Florence James, who helped him into an acting career. Cagney believed in hard work, later stating, "It was good for me. I feel sorry for the kid who has too cushy a time of it. Suddenly he has to come face-to-face with the realities of life without any mama or papa to do his thinking for him." 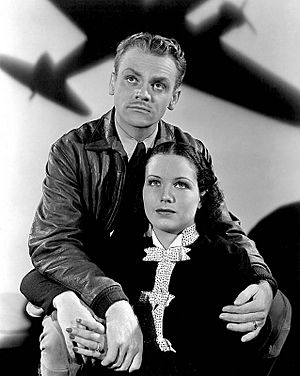 He started tap dancing as a boy (a skill that eventually contributed to his Academy Award) and was nicknamed "Cellar-Door Cagney" after his habit of dancing on slanted cellar doors. He engaged in amateur boxing, and was a runner-up for the New York State lightweight title. His coaches encouraged him to turn professional, but his mother would not allow it. He also played semiprofessional baseball for a local team, and entertained dreams of playing in the Major Leagues.

His introduction to films was unusual. When visiting an aunt who lived in Brooklyn opposite Vitagraph Studios, Cagney would climb over the fence to watch the filming of John Bunny movies. He became involved in amateur dramatics, starting as a scenery boy for a Chinese pantomime at Lenox Hill Neighborhood House, one of the first settlement houses in the nation, where his brother Harry performed and his soon-to-be friend, Florence James, directed. He was initially content working behind the scenes and had no interest in performing. One night, however, Harry became ill, and although Cagney was not an understudy, his photographic memory of rehearsals enabled him to stand in for his brother without making a single mistake. Therefore, Florence James has the unique distinction of being the first director to put him on a stage. Afterward, he joined a number of companies as a performer in a variety of roles. 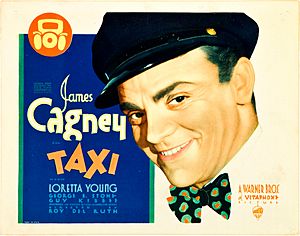 Lobby card for the American film Taxi! (1932) with James Cagney

In his first professional acting performance, Cagney danced costumed as a woman in the chorus line of the revue Every Sailor, in 1919. He spent several years in vaudeville as a dancer and comedian, until he got his first major acting part in 1925. He secured several other roles, receiving good notices, before landing the lead in the 1929 play Penny Arcade. After rave reviews, Warner Bros. signed him for an initial $500-a-week, three-week contract to reprise his role; this was quickly extended to a seven-year contract.

He became one of Hollywood's biggest stars and one of Warner Bros.' biggest contracts. In 1938, he received his first Academy Award for Best Actor nomination. In 1942, Cagney won the Oscar for his energetic portrayal of George M. Cohan in Yankee Doodle Dandy. He was nominated a third time in 1955. Cagney retired from acting and dancing in 1961 to spend time on his farm with his family. He came out of retirement 20 years later for a part in the movie Ragtime (1981), mainly to aid his recovery from a stroke.

Cagney walked out on Warner Bros. several times over the course of his career, each time returning on much improved personal and artistic terms. In 1935, he sued Warner for breach of contract and won. This was one of the first times an actor prevailed over a studio on a contract issue. He worked for an independent film company for a year while the suit was being settled—and established his own production company, Cagney Productions, in 1942, before returning to Warner four years later. Cagney also made numerous morale-boosting troop tours before and during World War II and was president of the Screen Actors Guild for two years. 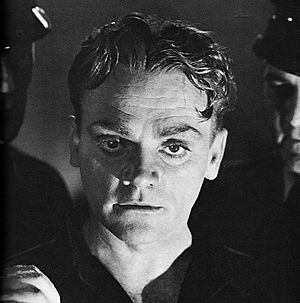 James Cagney in the final scene of Angels with Dirty Faces

Cagney remained in retirement for 20 years. After he had turned down an offer to play Alfred Doolittle in My Fair Lady, he found it easier to rebuff others, including a part in The Godfather Part II. He made few public appearances, preferring to spend winters in Los Angeles, and summers either at his Martha's Vineyard farm or at Verney Farms in New York. When in New York, Billie Vernon and he held numerous parties at the Silver Horn restaurant.

Cagney was diagnosed with glaucoma and began taking eye drops, but continued to have vision problems. On Zimmermann's recommendation, he visited a different doctor, who determined that glaucoma had been a misdiagnosis, and that Cagney was actually diabetic.

While at Coldwater Canyon in 1977, Cagney had a minor stroke. After two weeks in the hospital, Zimmermann became his full-time caregiver, traveling with Billie Vernon and him wherever they went. After the stroke, Cagney was no longer able to undertake many of his favorite pastimes, including horseback riding and dancing, and as he became more depressed, he even gave up painting.

Cagney made a rare TV appearance in the lead role of the movie Terrible Joe Moran in 1984. This was his last role. Cagney's health was fragile and more strokes had confined him to a wheelchair, but the producers worked his real-life mobility problem into the story.

In 1920, Cagney was a member of the chorus for the show Pitter Patter, where he met Frances Willard "Billie" Vernon. They married on September 28, 1922, and the marriage lasted until his death in 1986. Frances Cagney died in 1994. In 1941, they adopted a son whom they named James Francis Cagney III, and later a daughter, Cathleen "Casey" Cagney. Cagney was a very private man, and while he was willing to give the press opportunities for photographs, he generally spent his time out of the public eye. 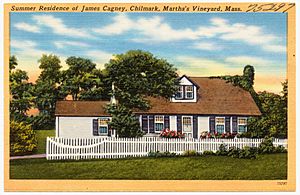 As a young man, Cagney became interested in farming – sparked by a soil conservation lecture he had attended – to the extent that during his first walkout from Warner Bros., he helped to found a 100-acre (0.40 km2) farm in Martha's Vineyard. Cagney loved that no concrete roads surrounded the property, only dirt tracks.

In 1955 Cagney bought a 120-acre (0.49 km2) farm in Stanfordville, Dutchess County, New York, for $100,000. Cagney named it Verney Farm. He turned it into a working farm, selling some of the dairy cattle and replacing them with beef cattle. He expanded it over the years to 750 acres (3.0 km2). Such was Cagney's enthusiasm for agriculture and farming that his diligence and efforts were rewarded by an honorary degree from Florida's Rollins College.

Cagney, born in 1899 (prior to widespread use of automobiles), loved horses from childhood. As a child, he often sat on the horses of local deliverymen, and rode in horse-drawn streetcars with his mother. As an adult, well after horses were replaced by automobiles as the primary mode of transportation, Cagney raised horses on his farms, specializing in Morgans, a breed of which he was particularly fond. 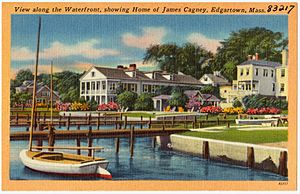 Cagney was a keen sailor and owned boats harbored on both US coasts, his joy in sailing, however, did not protect him from occasional seasickness—becoming ill, sometimes, on a calm day while weathering rougher, heavier seas at other times. Cagney greatly enjoyed painting, and claimed in his autobiography that he might have been happier, if somewhat poorer, as a painter than a movie star. The renowned painter Sergei Bongart taught Cagney in his later life and owned two of Cagney's works. Cagney often gave away his work, but refused to sell his paintings, considering himself an amateur. He signed and sold only one painting, purchased by Johnny Carson to benefit a charity. 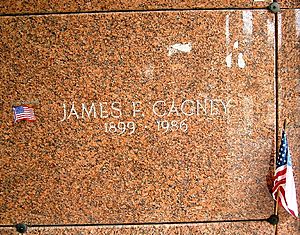 Cagney's crypt in the Gate of Heaven Cemetery

Cagney died at his Dutchess County farm in Stanfordville, New York, on Easter Sunday 1986, of a heart attack. He was 86 years old. A funeral Mass was held at Manhattan's St. Francis de Sales Roman Catholic Church. The eulogy at the funeral was given by his close friend, who was also the President of the United States at the time, Ronald Reagan. His pallbearers included the boxer Floyd Patterson, the dancer Mikhail Baryshnikov, actor Ralph Bellamy, and the director Miloš Forman. Governor Mario M. Cuomo and Mayor Edward I. Koch were also in attendance at the service. Cagney was interred in a crypt in the Garden Mausoleum at Cemetery of the Gate of Heaven in Hawthorne, New York. 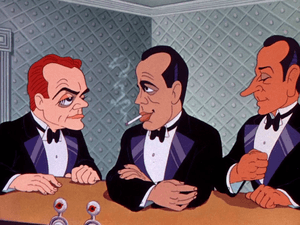 James Cagney won the Academy Award in 1943 for his performance as George M. Cohan in Yankee Doodle Dandy.

For his contributions to the film industry, Cagney was inducted into the Hollywood Walk of Fame in 1960 with a motion pictures star located at 6504 Hollywood Boulevard.

In 1974, Cagney received the American Film Institute's Life Achievement Award. Charlton Heston, in announcing that Cagney was to be honored, called him "...one of the most significant figures of a generation when American film was dominant, Cagney, that most American of actors, somehow communicated eloquently to audiences all over the world ...and to actors as well."

He received the Kennedy Center Honors in 1980, and a Career Achievement Award from the U.S. National Board of Review in 1981. In 1984, Ronald Reagan awarded him the Presidential Medal of Freedom.

Cagney was among the most favored actors for the director Stanley Kubrick and the actor Marlon Brando, and was considered by Orson Welles to be "maybe the greatest actor to ever appear in front of a camera." Warner Bros. arranged private screenings of Cagney films for Winston Churchill.

On May 19, 2015, a new musical celebrating Cagney, and dramatizing his relationship with Warner Bros opened off-Broadway in New York City at the York Theatre. Cagney, The Musical has since moved to the Westside Theatre.

All content from Kiddle encyclopedia articles (including the article images and facts) can be freely used under Attribution-ShareAlike license, unless stated otherwise. Cite this article:
James Cagney Facts for Kids. Kiddle Encyclopedia.