Dame Olivia Mary de Havilland DBE ( 1 July 1916 – 26 July 2020) was a British-American actress. The major works of her cinematic career spanned from 1935 to 1988. She appeared in 49 feature films, and was one of the leading actresses of her time. She was the last major surviving star from the Golden Age of Hollywood Cinema and oldest living Academy Award winner, until her death in July 2020. Her younger sister was actress Joan Fontaine.

De Havilland first came to prominence by forming a screen couple with Errol Flynn in adventure films such as Captain Blood (1935) and The Adventures of Robin Hood (1938). One of her best-known roles is that of Melanie Hamilton in the classic film Gone with the Wind (1939), for which she received her first of five Oscar nominations, the only one for Best Supporting Actress.

De Havilland departed from ingénue roles in the 1940s and later received acclaim for her performances in Hold Back the Dawn (1941), To Each His Own (1946), The Snake Pit (1948), and The Heiress (1949), receiving nominations for Best Actress for each, winning for To Each His Own and The Heiress. She was also successful in work on stage and television. De Havilland lived in Paris from the 1950s, and received honours such as the National Medal of the Arts, the Légion d'honneur, and the appointment to Dame Commander of the Order of the British Empire.

In addition to her film career, de Havilland continued her work in the theatre, appearing three times on Broadway, in Romeo and Juliet (1951), Candida (1952), and A Gift of Time (1962). She also worked in television, appearing in the successful miniseries, Roots: The Next Generations (1979), and Anastasia: The Mystery of Anna (1986), for which she received a Primetime Emmy Award nomination and won the Golden Globe Award for Best Supporting Actress in a Television Movie or Series. During her film career, de Havilland also collected two New York Film Critics Circle Awards, the National Board of Review Award for Best Actress, and the Venice Film Festival Volpi Cup. For her contributions to the motion picture industry, she received a star on the Hollywood Walk of Fame.

She is the sister of late actress Joan Fontaine, who also won the Academy Award. They did not get along ever since they were children.

De Havilland was born in Tokyo to British parents. She became an American citizen in 1941. She lived in Paris from 1956 until her death. 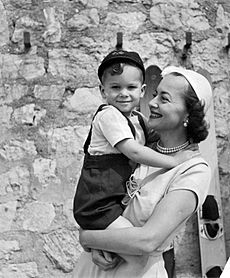 On August 26, 1946, she married Marcus Goodrich, a Navy veteran, journalist, and author of the 1941 novel Delilah. The marriage ended in divorce in 1953. They had one child, Benjamin Goodrich, who was born on September 27, 1949. He was diagnosed with Hodgkin's lymphoma at the age of 19, but was able to graduate from the University of Texas. He worked as a statistical analyst for Lockheed Missiles and Space Company in Sunnyvale, California, and as an international banking representative for the Texas Commerce Bank in Houston. He died on October 1, 1991, in Paris at the age of 42 of heart disease brought on by treatments for Hodgkin's disease, three weeks before the death of his father.

On April 2, 1955, de Havilland married Pierre Galante, an executive editor for the French journal Paris Match. Her marriage to Galante prompted her relocation to Paris. The couple separated in 1962, but continued to live in the same house for another six years to raise their daughter together. Galante moved across the street and the two remained close, even after the finalization of the divorce in 1979. She looked after him during his final bout with lung cancer prior to his death in 1998. They had one child, Gisèle Galante, who was born on July 18, 1956. After studying law at the Université de Droit de Nanterre School of Law, she worked as a journalist in France and the United States. Since 1956, de Havilland has lived in the same three-story house near Bois de Boulogne park in the Rive Droite section of Paris. 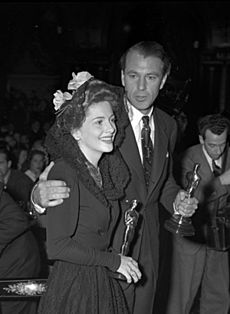 Joan Fontaine and Gary Cooper at the Academy Awards, 1942

De Havilland and her sister Joan Fontaine are the only siblings to have won Academy Awards in a lead acting category. According to biographer Charles Higham, the sisters always had an uneasy relationship, starting in early childhood when Olivia had trouble accepting the idea of having a younger sister, and Joan resenting her mother's favouring Olivia. Olivia would rip up the clothes that her sister was given to wear as hand-me-downs, forcing Joan to stitch them together again. This tension was made worse by Fontaine's frequent childhood illnesses, which led to her mother's overly protective expression "Livvie can, Joan can't." De Havilland was the first to become an actress, and for several years Fontaine was overshadowed by her sister's accomplishments. When Mervyn LeRoy offered Fontaine a personal contract, her mother told her that Warner Bros. was "Olivia's studio" and that she could not use the family name "de Havilland".

In 1942, de Havilland and Fontaine were both nominated for an Academy Award for Best Actress‍—‌de Havilland for Hold Back the Dawn and Fontaine for Suspicion. When Fontaine's name was announced as winner, de Havilland reacted graciously saying "We've got it!" According to biographer Charles Higham, Fontaine rejected de Havilland's attempts to congratulate her, leaving the other offended and embarrassed.

Their relationship was strained further in 1946 when Fontaine made negative comments to an interviewer about de Havilland's new husband Marcus Goodrich. When she read her sister's remarks, de Havilland was deeply hurt and waited for an apology that never was offered. The following year after accepting her first Academy Award for To Each His Own, de Havilland was approached backstage by Fontaine, who extended her hand to congratulate her; de Havilland turned away from her sister. The two did not speak for the next five years after the incident. This may have caused an estrangement between Fontaine and her own daughters, who maintained a covert relationship with their aunt.

Following her divorce from Goodrich, de Havilland resumed contact with her sister, coming to her apartment in New York and spending Christmas together in 1961. The final break between the sisters occurred in 1975 over disagreements over their mother's cancer treatment‍—‌de Havilland wanted to consult other doctors and supported exploratory surgery; Fontaine disagreed. Fontaine later claimed her sister had not notified her of their mother's death while she was touring with a play‍—‌de Havilland in fact had sent a telegram, which took two weeks to reach her sister. The sibling feud ended with Fontaine's death on December 15, 2013. The following day, de Havilland released a statement saying she was "shocked and saddened" by the news.

All content from Kiddle encyclopedia articles (including the article images and facts) can be freely used under Attribution-ShareAlike license, unless stated otherwise. Cite this article:
Olivia de Havilland Facts for Kids. Kiddle Encyclopedia.