Kodiak (Alutiiq: Sun'aq; Russian: Кадьяк, tr. Kadʹyak) is one of seven communities and the main city on Kodiak Island, Kodiak Island Borough, in the U.S. state of Alaska. All commercial transportation between the entire island and the outside world goes through this city either via ferryboat or airline. The population was 6,130 as of the 2010 census. 2014 estimates put the population at 6,304.

Originally inhabited by Alutiiq natives for over 7,000 years, the city was settled in the 18th century by the subjects of the Russian crown and became the capital of Russian Alaska. Harvesting of the area's sea otter pelts led to the near extinction of the animal in the following century and led to wars with and enslavement of the natives for over 150 years.

After the Alaska Purchase by the United States in 1867, Kodiak became a commercial fishing center which continues to be the mainstay of its economy. A lesser economic influence includes tourism, mainly by those seeking outdoor adventure trips. Salmon, halibut, the unique Kodiak bear, elk, Sitka deer (black tail), and mountain goats attract hunting tourists as well as fishermen to the Kodiak Archipelago. The Alaska Department of Fish and Game maintains an office in the city and a website to help hunters and fishermen obtain the proper permits and learn about the laws specific to the Kodiak area.

The city has four public elementary schools, a middle and high school, as well as a branch of the University of Alaska. An antenna farm at the summit of Pillar Mountain above the city historically provided communication with the outside world before fiber optic cable was run. Transportation to and from the island is provided by ferry service on the Alaska Marine Highway as well as local commercial airlines.

The Kodiak Archipelago has been home to the Alutiiq for over 7,000 years.). He was followed by the British captain James Cook fifteen years later, who first recorded "Kodiak" in his journals in 1778.

In 1792, the Russian Shelikhov-Golikov Company chief manager Alexander Baranov moved the post at Three Saints Bay (established in 1784) to a new site in Paul's Harbor (Свято-Павловской гавани, Svyato-Pavlovskoy Gavani). This developed as the nucleus of modern Kodiak. Baranov considered Three Saints Bay a poor location because it was too indefensible. The relocated settlement was first named Pavlovskaya Gavan (Павловская гавань – Paul's Harbor).

A warehouse was built in what became one of the key posts of the Shelikhov-Golikov Company, a precursor of the Russian-American Company and a center for harvesting the area's vast population of sea otters for their prized pelts. The warehouse still stands as the Baranov Museum. Because the First Native cultures revered this animal and would never harm it, the Russians had wars with and enslaved the Aleuts occurred during this era.

Eastern Orthodox missionaries settled on the island by the end of the 18th century, continuing European settlement of the island. They held the liturgy in native Tlingit from 1800.

The capital of Russian America was moved to Novoarkhangelsk (modern-day Sitka) in 1804. The Russian-American Company was established in 1799 as a joint-stock company by decree of Emperor Paul to continue the harvest of sea otter and other fur-bearing animals and establish permanent settlements. By the mid-19th century, the sea otter was almost extinct and 85% of the First Native population had disappeared from exposure to European diseases and violence.

When Russia sold Alaska to the United States in 1867, Kodiak developed as a center for commercial fishing, and canneries dotted the island in the early 20th century until global farm-raised salmon eliminated these businesses. New processing centers emerged and the industry continues to evolve. During the presidency of Theodore Roosevelt, animals such as the mountain goat, Sitka deer (black tail), rabbits, muskrats, beavers, squirrels, and others were introduced to the island and the Kodiak National Wildlife Refuge was created.

As Kodiak was incorporated in 1941, the U.S. feared attack from Japanese during World War II, and turned the town into a fortress. Roads, the airport, Fort Abercrombie, and gun fortifications improved the island's infrastructure. When Alaska became a state in 1959, government assistance in housing, transportation, and education added additional benefits.

In March 1964, a tectonic tsunami struck the city during the 1964 Alaska earthquake with 30-foot (9.1 m) waves that killed 15 people and caused $11 million in damages. Some areas near Kodiak were permanently raised by 30 feet (9.1 m). It wiped out the neighboring Native villages of Old Harbor and Kaguyak. The Standard Oil Company, the Alaskan King Crab Company, and much of the fishing fleet were also destroyed.

The community of Kodiak lies within the subpolar oceanic climate zone (Köppen Cfc), marked by relatively long and cold winters and mild summers. Precipitation is heavy year-round, though markedly less in the summer months. 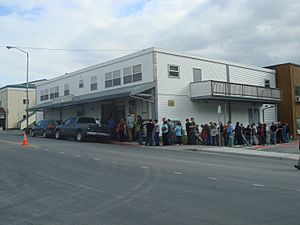 Customers line up in front of the Orpheum Theater

The city of Kodiak is home to a number of annual events that draw locals and people from off-island. The most well-known of these is Kodiak Crab Festival. Organized by the Kodiak Chamber of Commerce, the event takes place over Memorial Day weekend. It includes a county fair-style main event, with carnival rides, food and game booths, and group activities. In addition, a number of events are organized over the three-day weekend that include a kayak race, a marathon, an ultra-marathon, a 9.2-mile (14.8 km) mountain run called the Pillar Mountain Run and others. 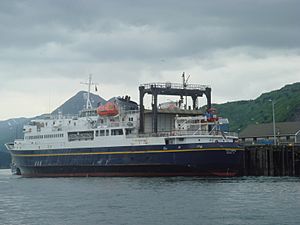 The ferryboat M/V Tustamena is part of the Alaska Marine Highway. It can carry 210 passengers and serves Kodiak, Homer, Whittier and the Aleutians as far as Dutch Harbor. 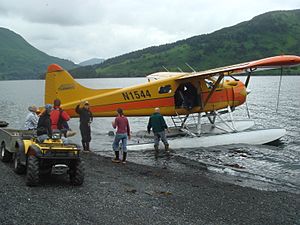 A Floatplane dropping off guests at a remote wilderness lodge on Raspberry Island (Alaska), part of the Kodiak archipelago. All guests to these lodges begin their journey in the city of Kodiak.

Kodiak Airport attracts both local and regional airlines, air taxis, and charter floatplanes and helicopters which provide transportation to residents and tourists on and off the island. The Alaska Marine Highway provides further transportation via two ferries: the M/V Tustumena and M/V Kennicott. These ships can carry a capacity of 211 and 748 passengers, respectively, and include routes between Kodiak, Homer and Whittier, Alaska. The ferry system no longer takes passengers to Seward. Floatplane and bushplane companies regularly take tourists to remote areas and wilderness lodges both on the various islands of the Kodiak Archipelago and the Katmai coast for bear viewing, hunting and hikes. The city business community also has a fleet of privately owned taxis as well as kayaks, mountain bikes and ATVs for rent.

Most electrical energy for the city is provided from the Terror Lake Hydroelectric Generating Station owned by the Kodiak Electrical Association. Substantial amounts of energy are also provided by wind turbines and by diesel generators. There are six wind turbines that supply up to 1.5 MW each and have a blade length of 38.5 meters and overall height of 118.5 meters.

Kodiak and its USCG base have a center role in the movie The Guardian starring Kevin Costner and Ashton Kutcher, some scenes were shot there and in the USCG base.

Darby Stanchfield, one of the stars of ABC's hit television series Scandal, was born and raised in Kodiak.

In 2012, rapper Pitbull was involved in an advertising campaign with Walmart, in which the Walmart store that gets the most Facebook "likes" from June 18 to July 15, 2012 would have Pitbull visit and put on a show there. An orchestrated internet campaign urged people to vote for the most remote location imaginable, Kodiak, resulting in a sizable lead for that store. Walmart confirmed that Kodiak won. Pitbull visited on July 30 where he received a key to the city from mayor Branson and then made an appearance before a crowd of hundreds at the Coast Guard base.

Czech carmaker Škoda Auto named their new SUV the Škoda Kodiaq, after the Alaskan brown bear, and in tribute Kodiak was renamed Kodiaq for one day (May 6, 2016). In a spelling change also intended to honor the indigenous Alutiiq, the city was renamed with a number of signs changed across town, including the port facilities and city limits. The letter ‘Q’ is a common ending for nouns in the Alutiiq language.

All content from Kiddle encyclopedia articles (including the article images and facts) can be freely used under Attribution-ShareAlike license, unless stated otherwise. Cite this article:
Kodiak, Alaska Facts for Kids. Kiddle Encyclopedia.