Whittier is a city at the head of the Passage Canal in the U.S. state of Alaska, about 58 miles (93 km) southeast of Anchorage. The city is within the Chugach Census Area, one of the two entities established in 2019 when the former Valdez–Cordova Census Area was dissolved. At the 2020 census the population was 272, up from 220 in 2010, almost all of whom live in a single building, the Begich Towers. Whittier is also a port for the Alaska Marine Highway. 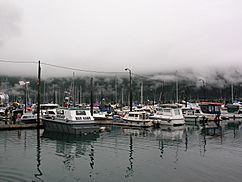 The region now occupied by Whittier was once part of the portage route of the Chugach people native to Prince William Sound. Later, the passage was used by Russian and American explorers, and by prospecting miners during the gold rush. The nearby Whittier glacier was named for American poet John Greenleaf Whittier in 1915, and the town eventually took the name as well.

During World War II, the United States Army constructed a military facility, complete with port and railroad near Whittier Glacier and named the facility Camp Sullivan. The spur of the Alaska Railroad to Camp Sullivan was completed in 1943 and the port became the entrance for United States soldiers into Alaska. 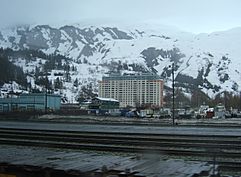 The two huge buildings that dominate the town were built after World War II. The 14-story Hodge Building (now Begich Towers) was completed in 1957 and contains 150 two- and three-bedroom apartments plus bachelor efficiency units. Dependent families and Civil Service employees were moved into this efficient high rise. The new Whittier School was connected by a tunnel at the base of the west tower so students could more easily and safely access school on days with bad weather. The building was named in honor of Colonel Walter William Hodge, who was a civil engineer and the commanding officer of 93rd Engineer Regiment on the Alcan Highway.

The other main structure in town, the Buckner Building, was completed in 1953, and was called the "city under one roof". The Buckner Building was eventually abandoned and remains empty today. Buckner and Begich Towers were at one time the largest buildings in Alaska. The Begich Building is now a condominium, and along with the two-story private residence known as Whittier Manor, houses a majority of the town's residents.

The port at Whittier was an active Army facility until 1960. In 1962, the U.S. Army Corps of Engineers constructed a petroleum products terminal, a pumping station and a 62-mile long, 8" pipeline to Anchorage in Whittier.

On March 28, 1964, Whittier suffered over $10 million worth of damage in what is now known as the Good Friday earthquake. The earthquake remains the largest U.S. earthquake, measuring 9.2 on the moment magnitude scale, and caused tsunamis along the West Coast of the U.S. The tsunami that hit Whittier reached a height of 13 m (43 ft) and killed 13 people.

Whittier was incorporated in 1969. Today, it is an increasingly popular port of call for cruise ships. It is utilized by local operations and about 100 passenger mid-sized cruise ships. When the Anton Anderson Memorial Tunnel opened to public access in 2000, it became the first highway to connect Whittier to Anchorage and inner Alaska—previously, the only ways to reach the town had been rail, boat and plane.

After the tunnel expanded access to Whittier, it began to be visited by larger cruise lines. It is the embarkation/debarkation point of one-way cruises from Anchorage to Vancouver by Princess Tours. Whittier is also popular with tourists, photographers, outdoor enthusiasts, paddlers, hikers, sport fishermen, and hunters because of its abundance of wildlife and natural beauty. Whittier is located within the Chugach National Forest, the second largest national forest in the U.S.

Whittier is in the Chugach School District and has one school serving approximately 38 students from preschool through high school, according to the 2015-2016 enrollment numbers.

Whittier has a borderline subarctic (Dfc) and subpolar oceanic (Cfc) climate under the Köppen climate classification; and has an annual precipitation of 197.8 inches (5,024.12 mm). It is the wettest city in Alaska and the United States, receiving significantly more annual precipitation than Yakutat and Ketchikan which are the second and third wettest cities in Alaska, respectively. Whittier is located at the northern tip of the northernmost temperate rainforest.

Whittier first appeared on the 1950 U.S. Census as an unincorporated village. It formally incorporated in 1969.

Access to Whittier may be accomplished by various modes.

There is a harbor and a deepwater port used by cruise ships and the Alaska Marine Highway.

Whittier Airport (PAWR) is an airfield with one aircraft runway designated 4/22 (formerly 3/21) with a gravel surface measuring 1,480 by 60 feet (451 x 18 m). There are no other facilities and the runway is not maintained in winter. For the 12-month period ending December 31, 2005, the airport had 700 aircraft operations, an average of 58 per month: 97 percent general aviation and 3 percent air taxi. At that time there were two single-engine aircraft based at this airport. The runway was 500 feet longer but was damaged by the 1964 Good Friday earthquake. 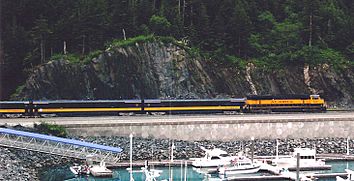 By land, access is through the Anton Anderson Memorial Tunnel.

Known by locals as the Whittier tunnel or the Portage tunnel, the Anton Anderson Memorial Tunnel is a tunnel through Maynard Mountain. It links the Seward Highway south of Anchorage with Whittier and is the only land access to the town. It is part of the Portage Glacier Highway and at 13,300 feet (4,050 m), is the second longest highway tunnel, and longest combined rail and highway tunnel in North America.

Whittier is Alaska Rail ARRC's connection to the rail systems in Canada and the Lower 48 states (by way of rail barge).

All content from Kiddle encyclopedia articles (including the article images and facts) can be freely used under Attribution-ShareAlike license, unless stated otherwise. Cite this article:
Whittier, Alaska Facts for Kids. Kiddle Encyclopedia.