John Greenleaf Whittier (December 17, 1807 – September 7, 1892) was an American poet. He was from Haverhill, Massachusetts and was a Quaker. Like many Quakers, Whittier believed that slavery was wrong. Whittier was active in the movement to end American slavery, and was a member of the anti-slavery Liberty Party.

He died at home on September 7, 1892, and was buried in Amesbury, Massachusetts. 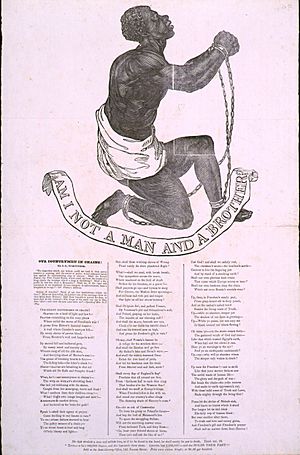 Broadside publication of Whittier's Our Countrymen in Chains

All content from Kiddle encyclopedia articles (including the article images and facts) can be freely used under Attribution-ShareAlike license, unless stated otherwise. Cite this article:
John Greenleaf Whittier Facts for Kids. Kiddle Encyclopedia.