Hampton Falls (formerly the Third Parish and Hampton Falls) is a town in Rockingham County, New Hampshire, United States. The population was 2,236 at the 2010 census.

The land of Hampton Falls was first settled by Europeans in 1638, the same time as Hampton, which it was then part of. The settlement of Hampton joined Norfolk County, Massachusetts Colony, in 1643, along with Exeter, Dover, Portsmouth, and Salisbury and Haverhill of Massachusetts. The county existed until 1679, when the modern-day New Hampshire towns separated from Massachusetts Bay Colony.

Records indicate a building that became a church may have existed near where the Weare Monument now is in 1665, but when it was first built is unknown. It was not until 1709 that the town was officially established as the Third Parish of Hampton. The Third Parish originally consisted of all land south of the Taylor River and north of the New Hampshire/Massachusetts border, or the modern-day towns of Seabrook, Kensington, and Hampton Falls. A meeting house was built shortly after and Thomas Crosby became the town's minister for the church. Forty-nine members of the Hampton Church were dismissed late in 1711, only to become members of the new church in the Third Parish. Parish officers and a representative were chosen in 1718. The first town meeting was held and town records began that year also. The 7,400-acre (30 km2) town received its grant as an independent town with the name "Hampton falls" in 1726, but was still referred to as a parish until the Revolutionary War. Those who did use its actual name in writing spelled it with a lowercase f until around the same time.

An attempt was made in 1732 to separate the western portion of Hampton falls and make it a parish of Kingston. The proposal failed in a way, yet succeeded in another; the land was separated, but it did not become part of Kingston, but became a town of its own, Kensington.

A disease known as the Throat Distemper (now thought to have been a malignant form of diphtheria) infected the town with its symptoms in 1735 and 1736. Two-hundred and fourteen people of Hampton Falls perished, 96 of them being under the age of ten. Only two homes in town were throat distemper free. It passed through the town again in 1754, with far fewer casualties, but still many. 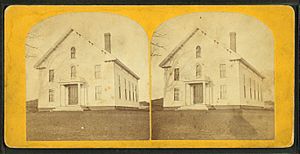 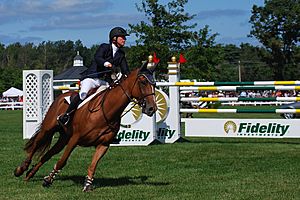 Seventy-two people wanted Hampton Falls (which then included Seabrook and Kensington) to become a part of Massachusetts in 1739, including Meshech Weare, but the proposal failed in the end. In 1765, the Presbyterians of the town wanted to form a new parish in the southern portion of the town, where a church of their religion existed. A town meeting was held on December 30 when the rest of the villagers learned of the Presbyterians' plans, and it was decided that the town would be separated into two. The new parish was formed in 1768, and became incorporated under the name Seabrook shortly after. Hampton Falls was considered one of the leading manufacturing towns in the entire state of New Hampshire around the time of 1770.

A plan to unite Seabrook and portions of Hampton Falls together was thought up in 1782. The town would've been called New Hampton Falls, but Hampton Falls was successful in making the proposal fail. In 1835, the town of Hampton Falls had a new meeting-house erected. Where in town it existed is unknown.

On the night between October 29 and October 30 in 1827, an earthquake struck the small town. A flash of light from a fault in the southern region of the town occurred, with violent trembeling shortly following. It caused at least three chimneys to collapse partially or completely, with several others cracked. Another, more severe earthquake also struck Hampton Falls on November 18, 1755, causing more, but not a lot of damage.

Hampton Falls borders Kensington to the west, Exeter and Hampton to the north, and Seabrook to the south. Some other nearby places include Boston, Massachusetts, only 45 miles (72 km) away, and Portsmouth, New Hampshire, a mere 15 miles (24 km) to the north.

There were 704 households, out of which 34.7% had children under the age of 18 living with them, 70.5% were married couples living together, 5.1% had a female householder with no husband present, and 22.4% were non-families. Of all households, 16.5% were made up of individuals, and 7.8% had someone living alone who was 65 years of age or older. The average household size was 2.67 and the average family size was 3.03.

According to State figures, "Population in Hampton Falls tripled over the last fifty years, growing above the statewide average rate in three of the five decades. Decennial growth rates ranged from a nine percent increase between 1970-1980 to a 42 percent increase between 1960-1970. Population in Hampton Falls grew by a total of 1,251 residents, going from 629 in 1950 to 1,880 residents in 2000." 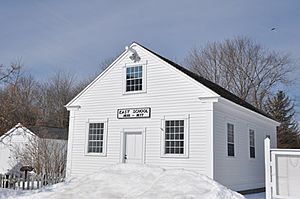 The old East School, adjacent to the public library

Once a farming and lumbering community, the numerous falls on the Taylor River provided water power for mills operating within the town. Today it is largely residential, with numerous antique shops along U.S. 1. Applecrest Farm Orchards, established in 1913, is the town's largest employer, with 18 employees.

Currently, the Lincoln Akerman School is the only public school in town. But at one point, five public schools existed, the North, South, West, and two East schools. One of the East Schools, founded around the time of the Civil War, burned down in 1947 when its furnace exploded, and the Lincoln Akerman School replaced it in 1949. While a new school was being built, students had to travel to the neighboring town of Seabrook, New Hampshire to attend school. The other East School was moved to an area near the new library. Another school was turned into a home, and another was crushed by a boulder one winter when students pushed it off a hill.

Heronfield Academy, a private Episcopal middle school, is located on Exeter Road on the border of Hampton Falls and Exeter.

In 1993, kindergarten was added to the school, though it is not required in the state of New Hampshire.

In the mid-1990s Dan Brown, future best-selling author of The Da Vinci Code, taught Spanish to the school's 6th, 7th, and 8th graders.

In 2003, Lincoln Akerman was cited in The Hampton Union for, according to the New Hampshire Educational Improvement and Assessment Program (NHEIAP), being notable for having scores that were "significantly above the state average" and climbing. Specific subjects cited were social studies, language arts, and math.

The current principal is Beth Raucci, who has held that position since 2018. 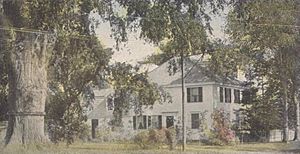 All content from Kiddle encyclopedia articles (including the article images and facts) can be freely used under Attribution-ShareAlike license, unless stated otherwise. Cite this article:
Hampton Falls, New Hampshire Facts for Kids. Kiddle Encyclopedia.