The Wizard of Oz facts for kids 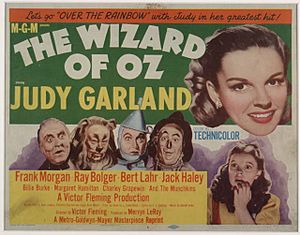 The Wizard of Oz is an American musical movie. It was produced by MGM and released by RKO in 1939. The movie is based on the children's book The Wonderful Wizard of Oz by L. Frank Baum. This book was published in 1900. The book and movie are about a little girl's adventures in the land called Oz.

The song "Over the Rainbow" won the Academy Award for Best Original Song. The movie was first televised in 1956. It became an annual Thanksgiving television special for many years. The movie was named the most-watched motion picture in history by the Library of Congress.

In 1998, the movie was sixth on the American Film Institute's 100 Years... 100 Movies list. The movie has been chosen for preservation in the United States National Film Registry. 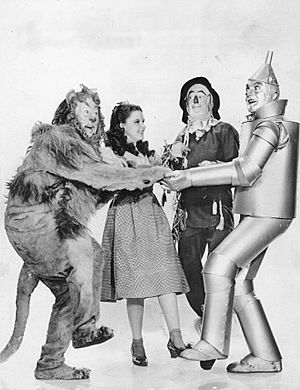 Stars of the movie

Dorothy (Judy Garland) lives on a drab Kansas farm with her Auntie Em and Uncle Henry (Clara Blandick and Charlie Grapewin). A powerful storm sweeps her away to the Land of Oz. She accidentally kills a wicked witch. She wants to go home, but only the Wizard of Oz (Frank Morgan) can send her home. She must go to the Emerald City to see him. She sets off on the Yellow Brick Road wearing the witch's ruby slippers. She makes three friends on the road: a Scarecrow, a Tin Man, and a Cowardly Lion (Ray Bolger, Jack Haley, and Bert Lahr).

In the Emerald City, the four friends are welcomed as heroes. The Wizard prepares his hot air balloon to take Dorothy back to Kansas. The balloon takes off without her. A good witch called Glinda (Billie Burke) tells Dorothy she can go home by just clicking the heels of the ruby slippers together and thinking about home. She does this. She wakes up in her bed. Her adventures have been a dream.

All content from Kiddle encyclopedia articles (including the article images and facts) can be freely used under Attribution-ShareAlike license, unless stated otherwise. Cite this article:
The Wizard of Oz Facts for Kids. Kiddle Encyclopedia.