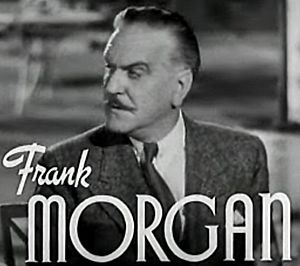 Frank Morgan (June 1, 1890 – September 18, 1949) was an American actor. His real name was Francis Phillip Wuppermann. He was born in New York City. He attended Cornell University. His brother, Ralph, was in show business. Morgan began acting in 1914. On movies, he played various characters in the 1939 movie The Wizard of Oz. Morgan was married and had a son. He died of a heart attack on September 18, 1949. He has a star on the Hollywood Walk of Fame.

All content from Kiddle encyclopedia articles (including the article images and facts) can be freely used under Attribution-ShareAlike license, unless stated otherwise. Cite this article:
Frank Morgan Facts for Kids. Kiddle Encyclopedia.