With her flair for light comedy as well as emotional drama, Colbert became one of the biggest box-office stars of her time. In 1999, she was ranked as the 12th greatest female star of all time by the American Film Institute in their list AFI's 100 Years... 100 Stars. Colbert once said to an interviewer, "Audiences always sound like they're glad to see me, and I'm damned glad to see them."

She was born Emilie "Lily" Chauchoin in Saint-Mandé, France, September 13, 1903, to Georges Cauchoin and his wife, the former Jeanne Loew. Her family emigrated to the United States and settled in New York City. She had one brother, Charles, who used the surname Wendling and went on to become his sister's agent.

She began acting in high school and in 1923 appeared on the Broadway stage in a small part. Hooked, she gave up on her plans to be a fashion designer to instead pursue a career in acting. She made her first motion picture appearance in 1927, in For the Love of Mike, a silent movie shot on location in Paramount Studios in New York, New York facilities. However, talking movies were taking over and two years later, Colbert appeared in her first talking movie, The Hole in the Wall, co-starring another newcomer, Edward G. Robinson . 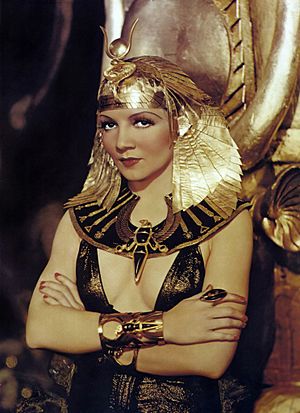 Screen capture of Colbert in Cleopatra, 1934

In 1930 Colbert signed a contract with Paramount Pictures, who were looking for stage actors who could handle dialog in the new "talkies" medium. Colbert's elegant, musical voice was one of her best assets. Some of her early hit movies were Manslaughter (1930) and Honor Among Lovers (1931), both with Fredric March, The Smiling Lieutenant (1931), with Maurice Chevalier and Miriam Hopkins, and Torch Singer (1933), with Ricardo Cortez and David Manners.

Colbert's career got a huge boost when Cecil B. DeMille cast her as the Roman empress Poppaea in his historical epic The Sign of the Cross (1932), opposite Fredric March and Charles Laughton (as Nero).

She worked again for DeMille and was dazzling as his Cleopatra (1934), opposite Warren William and Henry Wilcoxon. In 1934 she won an Academy Award for Best Actress for her role opposite Clark Gable in the Frank Capra classic screwball comedy It Happened One Night, a movie she initially described as the "worst picture in the world". Her performance, however, proved to Hollywood that she was an expert comedienne. She initially balked at pulling up her skirt to entice a passing car to give her and Gable a ride in one famous scene, complaining that it was unladylike. However, upon seeing the chorus girl who was brought in as her body double, an outraged Colbert told the director, "Get her out of here. I'll do it. That's not my leg!" Colbert then starred in the original Imitation of Life (1934), opposite Warren William and Louise Beavers.

Colbert believed that her face was difficult to light and photograph, and was obsessed with not showing her "bad" side, the right, to the camera, because of a small bump that resulted from a childhood broken nose.

From 1936 to 1944, she starred in numerous programs of Cecil B. DeMille's Lux Radio Theater, which was one of the most popular dramatic radio shows at the time. In 1952, she returned to work in her native France where she stayed until 1955.

Apart from making two more Hollywood movies, she went back to Broadway in 1958 doing "The Marriage Go-Round" with Charles Boyer, earning a 1959 Tony Award nomination for her work. Also for her Chicago theatre work, in 1980 she won the Sarah Siddons Award. In 1984 she appeared with Rex Harrison in Frederick Lonsdale's "Aren't We All" at the Haymarket Theatre, London, and also the Brooks Atkinson Theatre on Broadway, presented by Douglas Urbanski. Ms. Colbert's last movie was Parrish in 1961. She acted in numerous Broadway plays for the next twenty years. In 1987, she did a television mini-series titled The Two Mrs. Grenvilles and was nominated for an Emmy Award for Outstanding Supporting Actress in a Mini-series or a Special. In 1988, she won the Golden Globe Award for Best Performance by an Actress in a Supporting Role in a Series, Mini-Series or Motion Picture made for TV. In 1989 she received the Kennedy Center Honors.

During her career, Claudette Colbert played in sixty-five movies. For her contribution to the motion picture industry, she was honored with a star on the Hollywood Walk of Fame. 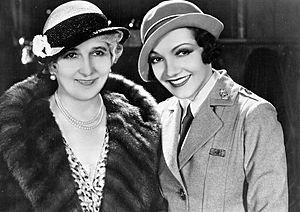 Colbert and her mother Jeanne in 1936

Colbert married twice. Her first husband was Norman Foster, an actor and later a director, whom she married in 1928 and divorced in Mexico in 1935. According to the account of the divorce in the New York Times, published on 31 August 1935, "Some secrecy surrounded the proceedings, for while Mr. Feldman [Colbert's agent] apparently was at liberty to tell of the divorce being granted, he said he could not tell where in Mexico it was obtained." The report further stated that "The Fosters created something of a sensation when they disclosed that they were trying to remain happily married while living in separate homes. But even this experiment apparently failed." Four months after her divorce, on 24 December 1935, Colbert married Dr. Joel J. Pressman, a throat specialist, who died in 1968; her former husband went on to marry the actress Sally Blane, a sister of Loretta Young.

When she retired from motion pictures, Colbert and her husband moved to Palm Springs where she operated a store for a time before moving to Barbados. The idea of moving to Barbados came to her following a visit to Noël Coward's house in Jamaica. At her home there, called Bellerive, she spent her later years as a hostess to the world's powerful and famous. Ronald Reagan was one of her guests during his presidency, as were Lillian Helman, Kirk Douglas, Jack Benny, Rex Harrison, and Slim Keith. She had a small guest house built on the property for the honeymoon of Frank Sinatra and Mia Farrow.

Colbert died at her home in Barbados, following series of small strokes during the last two years of her life at the age of 92, and she was interred there in the Parish of St. Peter Cemetery along with her mother and husband. A requiem mass was held at St. Vincent Ferrer church in New York City later.

According to an article published in the 10 August 1996 issue of the Cincinnati Post, the childless Colbert left most of her estate, estimated at $3.5 million and including her Manhattan apartment and her home in Barbados, to a friend, Helen O'Hagan (1931—), a retired director of corporate relations at Saks Fifth Avenue, whom Colbert had met in 1961 on the set of Parrish, the actress's last movie. Bellerive was later bought by David Geffen.

All content from Kiddle encyclopedia articles (including the article images and facts) can be freely used under Attribution-ShareAlike license, unless stated otherwise. Cite this article:
Claudette Colbert Facts for Kids. Kiddle Encyclopedia.