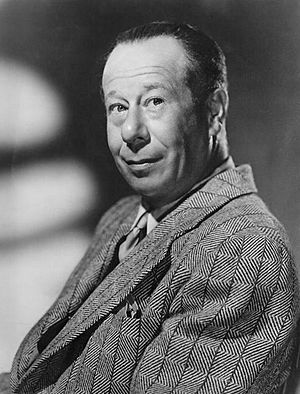 Bert Lahr (born Irving Lahrheim, August 13, 1895 – December 4, 1967) was an American entertainer. He was born Irving Lahrheim in New York City. He started his career in vaudeville. He performed in Broadway musicals. He was in Cole Porter's musical DuBarry was a Lady in 1939. He was also in the movie The Wizard of Oz in 1939. He played the Cowardly Lion. Lahr was married twice. He had three children. He died of cancer, aged 72.

All content from Kiddle encyclopedia articles (including the article images and facts) can be freely used under Attribution-ShareAlike license, unless stated otherwise. Cite this article:
Bert Lahr Facts for Kids. Kiddle Encyclopedia.