Stevenson was born in Los Angeles, California to Lewis Stevenson and Helen Davis Stevenson. His maternal great-grandfather Jesse W. Fell was a close friend and campaign manager for Abraham Lincoln. His oldest son Adlai Stevenson III became a United States Senator from Illinois from 1970 until 1981. He grew up in Bloomington, Illinois. He studied at Bloomington High School until his junior year. After that he went at University High School in Normal, Illinois. Then he studied at Princeton University and Northwestern University Law School.

He married Ellen Borden in 1928 and divorced in 1949. Stevenson is a second cousin, once removed of actor McLean Stevenson. His son is former Illinois Senator Adlai Stevenson III.

In 1953, he was elected a Fellow of the American Academy of Arts and Sciences.

In 1957 he went back to law practice. He was employed part-time by Encyclopædia Britannica.

He was appointed Ambassador to the United States in 1961. Stevenson was one of the choices for Secretary of State but was aware of himself that he was a skilled politician.

Stevenson's moments happened during the Cuban Missile Crisis when he gave a presentation at an emergency session of the Security Council on October 25, 1962. 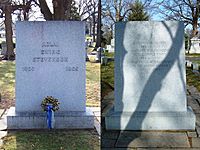 Stevenson suffered a heart attack on the afternoon and died later on July 14, 1965 in London of heart failure. The funeral in Bloomington, Illinois Unitarian Church was attended by President Lyndon B. Johnson and Vice President Hubert Humphrey and Supreme Court Chief Justice Earl Warren.

All content from Kiddle encyclopedia articles (including the article images and facts) can be freely used under Attribution-ShareAlike license, unless stated otherwise. Cite this article:
Adlai Stevenson II Facts for Kids. Kiddle Encyclopedia.