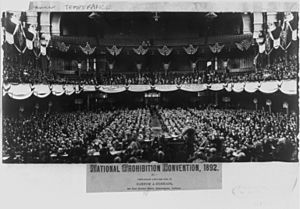 The Prohibition Party (PRO) is a political party in the United States. The party is known for its historic opposition to the sale or consumption of alcoholic beverages.

It is the oldest existing third party in the United States. The party was an important part of the temperance movement. While never one of the leading parties in the United States, it was once an important force in the Third Party System during the late 19th and early 20th centuries. It declined dramatically after the repeal of Prohibition in 1933.

All content from Kiddle encyclopedia articles (including the article images and facts) can be freely used under Attribution-ShareAlike license, unless stated otherwise. Cite this article:
Prohibition Party Facts for Kids. Kiddle Encyclopedia.