Bloomington is a city in Illinois, United States and the county seat of McLean County. It is adjacent to Normal, and is the more populous of the two principal municipalities of the Bloomington-Normal metropolitan area.

The 2010 census showed the city had a population of 76,610, making it the 12th most populated city in Illinois, and the fifth-most populous city in the state outside of the Chicago Metropolitan Area. Combined with Normal, the twin cities have a population of roughly 130,000. 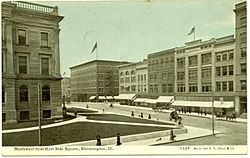 Looking northwest from the east side of the downtown square, about 1910

The Bloomington area was at the edge of a large grove occupied by the Kickapoo people before the first Euro-American settlers arrived in the early 1820s. Springing from the settlement of Keg Grove, later called Blooming Grove, Bloomington was named as county seat on December 25, 1830, when McLean County was created.

When the County of McLean was incorporated, a county seat was established. However, the legislation stated the site of Bloomington "would be located later." James Allin, one of the new county's promoters, offered to donate 60 acres (240,000 m2) of his land for the new town. His offer was accepted, and Bloomington was laid out. Its lots were sold at a well-attended and noisy auction on the 4th of July 1831. At this time there were few roads, but rich soils brought new farmers who began commerce by conducting their business in the newly formed county. People came from all over to trade and do business at the town's center, known today as Downtown Bloomington, including Abraham Lincoln who was working as a lawyer in nearby Springfield, Illinois.

In 1900 an officer on patrol discovered a fire in a laundry across the street from the old City Hall and Police Station. He sounded the alarm but the fire destroyed the majority of the downtown, especially the areas north and east of the courthouse. However, the burnt area was quickly rebuilt from the designs of local architects George Miller and Paul O. Moratz.

During the first two decades of the 20th century, Bloomington continued to grow. Agriculture, the construction of highways and railroads, and the growth of the insurance business (mainly State Farm Insurance) all influenced the growth of Bloomington and its downtown area. The downtown area became a regional shopping center attracting trade from adjoining counties. Labor unions grew in strength. This trend has continued to the present day, where expansion has included many restaurants and other businesses.

The City of Bloomington and McLean County comprise the fastest-growing metropolitan area in Illinois. The area's population has grown 28% from 1990 through 2006. The fastest growth has been in Bloomington, as the U.S. Census Bureau conducted a special census of that city in February, 2006, showing a population of 74,975, a 15.7% increase in less than six years.

Interstates 39, 55 and 74 intersect at Bloomington, making the city a substantial transportation hub. US highways 51 and 150 and Illinois state route 9 also run through Bloomington. The legendary highway U.S. Route 66 once ran directly through the city's downtown and later on a bypass to the east. The Bloomington-Normal Public Transit System operates Bloomington-Normal's internal bus system, and several intercity bus lines operate north-south and east-west service through the city. 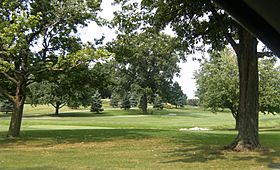 The golf course at the Bloomington Country Club

The Den at Fox Creek is a 4-star, Arnold Palmer Signature Designed Golf Course that opened in 1997 and features bent grass tees, greens and fairways. Amenities include GPS-equipped carts, club rental, pro shop and snack bar. There are nine holes with water hazards, 131 sand traps and a unique alternative shot closing the 18th hole on this par 72 course. Practice facilities include a large bent grass driving range and tees with practice chipping and putting greens. The Den is home to both the IHSA Boys' Golf State Tournament and COUNTRY Youth Classic each summer. 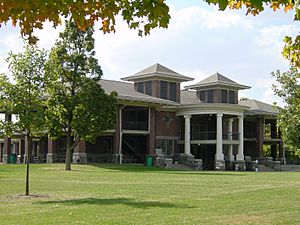 Area attractions and businesses also offer a number of tours in Bloomington.

All content from Kiddle encyclopedia articles (including the article images and facts) can be freely used under Attribution-ShareAlike license, unless stated otherwise. Cite this article:
Bloomington, Illinois Facts for Kids. Kiddle Encyclopedia.