McLean County is the largest county by land area in the U.S. state of Illinois. According to the 2010 census, it had a population of 169,572. Its county seat is Bloomington. McLean County is included in the Bloomington–Normal, IL Metropolitan Statistical Area.

McLean County was formed late in 1830 out of Tazewell County. It was named for John McLean, United States Senator for Illinois, who died in 1830. 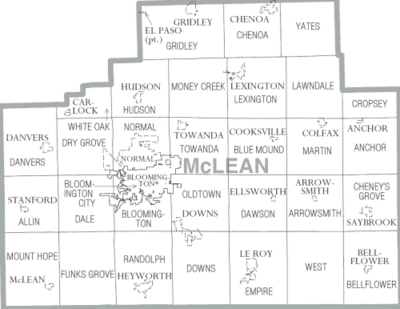 McLean County is divided into these townships:

All content from Kiddle encyclopedia articles (including the article images and facts) can be freely used under Attribution-ShareAlike license, unless stated otherwise. Cite this article:
McLean County, Illinois Facts for Kids. Kiddle Encyclopedia.