Ford County is a county located in the U.S. state of Illinois. According to the 2010 United States Census, it had a population of 14,081. Its county seat is Paxton. Ford County was part of the Champaign–Urbana, IL Metropolitan Statistical Area until 2018, when the Office of Management and Budget removed the county from the area.

Ford County was formed February 17, 1859. It was the last of Illinois' 102 counties to be formed, and was created at the behest of some residents of Vermilion County, who complained to the General Assembly that they were located too far from the Iroquois County county seat. Ford County was named in honor of Thomas Ford, who served as Governor of Illinois from 1842 to 1846. It was the last county to be formed in Illinois.

President Gerald Ford visited Ford County on October 24, 1974, on the occasion of the retirement of Congressman Leslie C. Arends of Melvin who served in congress for 40 years, including over 30 years as Republican Minority Whip.

The Libertarian Party has performed well enough in recent elections to gain "established party" status, making it easier for Libertarian candidates to appear on the ballot. This is the only county in Illinois where this is the case. 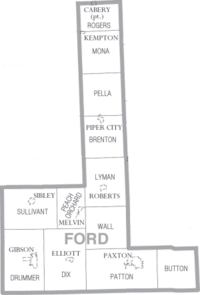 All content from Kiddle encyclopedia articles (including the article images and facts) can be freely used under Attribution-ShareAlike license, unless stated otherwise. Cite this article:
Ford County, Illinois Facts for Kids. Kiddle Encyclopedia.