Iroquois County is a county located in the northeast part of the U.S. state of Illinois. According to the 2010 census, it has a population of 29,718. It is the only county in the United States to be named Iroquois, after the American Indian people. The county seat is Watseka. The county is located along the border with Indiana.

Iroquois County was created on February 26, 1833 out of a portion of Vermilion County. It was named for the Iroquois River, which was itself named for the Iroquois people. The first county seat was established at the town of Iroquois in 1837, though no official buildings were constructed there and offices were rented. Several other sites for the county seat were examined, and in 1839 it was moved to Middleport; a court house and jail were built there. There was a long battle between Middleport and Watseka (also known as South Middleport) as to which should be the county seat; in 1865, it was finally moved to Watseka. The town of Middleport no longer exists, but there is a township of that name. A courthouse was built in Watseka in 1866 at a cost of $28,000 and included a jail in the basement; this building was expanded in 1881, and a new jail was built in 1893 just east of the courthouse.

The northern border of the county is about 60 miles (97 km) south of the city of Chicago. The county is bordered on the east by the state of Indiana and its counties of Benton and Newton. To the north lies Kankakee County. Vermilion County, out of which Iroquois County was originally formed, lies to the south. To the west is Ford County.

The Iroquois River enters the county from Indiana and flows westward along the south side of the village of Iroquois, then along the north side of the city of Watseka, whereupon it veers to the north and joins the larger Kankakee River near the city of Kankakee in the county of the same name; the Kankakee River then flows into the Illinois River further to the northwest in Will County. Sugar Creek, further to the south, also flows from the east to the west, entering from Indiana east of Stockland; it passes through the south edge of Milford, is joined by Mud Creek coming up from the south, and winds to the north past the village of Woodland and meets the Iroquois River near Watseka.

Interstate 57 passes through the west part of the county on its route between Champaign and Chicago. From north to south, it passes through or near Chebanse, Clifton, Ashkum, Danforth, Gilman, Onarga, Buckley, and Loda.

The county is bisected by the east–west U.S. Route 24, which passes through Gilman, Crescent City, the county seat of Watseka, and Sheldon.

Several railroad lines pass through the county. The Toledo, Peoria and Western Railway operates a line that begins in Peoria and runs from east to west through Iroquois County, passing through Gilman and Watseka and continuing into Indiana. A Norfolk Southern Railway line runs nearly parallel with Interstate 57 on its way to Chicago. A CSX Transportation line passes from north to south through the eastern part of the county; a Union Pacific line joins it south of Woodland. Further east, the Kankakee, Beaverville and Southern Railroad operates a north–south line. 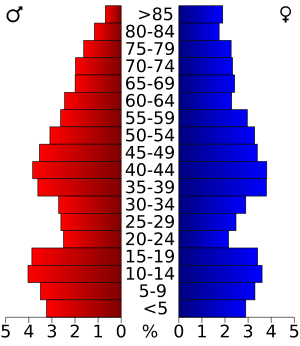 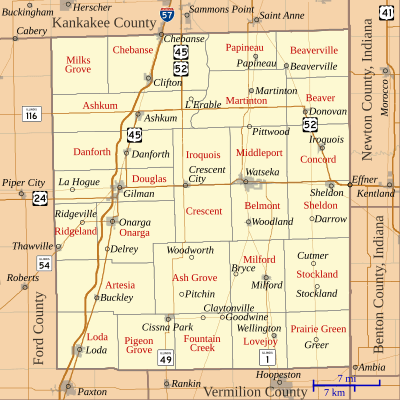 Map of Iroquois County, with townships labeled in red

In 1855, a popular vote resulted in the adoption of township government, which was implemented in 1856. At that time, eleven townships were created; they are listed below.

Over the next several decades, more townships were created from the existing ones, for a final total of twenty-six. The newer townships are listed below in order of creation.

All content from Kiddle encyclopedia articles (including the article images and facts) can be freely used under Attribution-ShareAlike license, unless stated otherwise. Cite this article:
Iroquois County, Illinois Facts for Kids. Kiddle Encyclopedia.