Beaverville (formerly St. Marye) is a village in Beaverville Township, Iroquois County, Illinois, United States. The population was 391 at the 2000 census.

The legend of the founding of St. Marie says that thirty-two families from the area of Montreal, Canada, mostly newlywed or single came up the St. Lawrence River in search of farmland on the prairie. They traveled across the Great Lakes and stopped at Fort Dearborn (Chicago). Then they pushed south through the swamps and frontier until they reached what is now Beaverville. The settlement in 1851 was led by Francis Besse, who became a general merchant. The group consisted of families with names such as Fortin, Dionne, Boudreau, Benoit, Nourie, Lafond, and at least six Arseneau families. They settled here because of the good land and the many creeks. In 1905, the village name, St. Marie, was changed to Beaverville, when the village founders realized that there was another town in Illinois named St. Mary.

The town's current name was inspired by the profusion of beavers in the area in the early 19th century, when Beaver Lake right across the border in Indiana still existed.

The Cathedral of the Cornfields 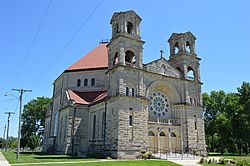 Beaverville is home to St. Mary's Catholic Church, known as the "Prairie Cathedral" or the "Cathedral of the Cornfields." Built in 1909, the structure is recorded in the National Register of Historic Places, and is large enough that its red, clay-tile roof can be seen from several miles away.

There were 151 households out of which 29.8% had children under the age of 18 living with them, 51.7% were married couples living together, 10.6% had a female householder with no husband present, and 31.1% were non-families. 25.2% of all households were made up of individuals and 17.9% had someone living alone who was 65 years of age or older. The average household size was 2.59 and the average family size was 3.05.

All content from Kiddle encyclopedia articles (including the article images and facts) can be freely used under Attribution-ShareAlike license, unless stated otherwise. Cite this article:
Beaverville, Illinois Facts for Kids. Kiddle Encyclopedia.