Watseka is a city in and the county seat of Iroquois County, Illinois, United States. It is located approximately 15 miles (24 km) west of the Illinois-Indiana state line on U.S. Route 24.

Incorporated in 1865, the name "Watseka" derives from the Potawatomi name "Watch-e-kee", "Daughter of the Evening Star", the wife of early eastern Illinois settler Gurdon Saltonstall Hubbard.

The Old Iroquois County Courthouse was constructed in 1866, with two additions built in 1881 and 1927. In the early 1960s, an Iroquois County resident, Mrs. Katherine Clifton, bequeathed to the county in her will a large sum of money and a site upon which to build a new courthouse. It is the only courthouse in the United States built entirely with private funds.

The old courthouse was advertised for sale and fell into disuse. In 1967, during the Centennial Celebration of Watseka, the Iroquois County Historical Society was organized, and circulated petitions throughout the county not to sell the Old Courthouse. The petitions were approved by the County Board of Supervisors, and the Old Courthouse re-opened as a museum that same year. In 1975, the Old Courthouse was listed on the National Register of Historic Places. 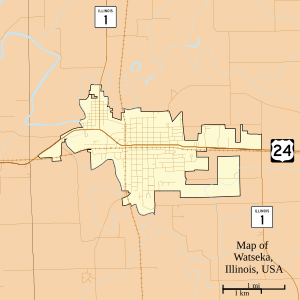 Watseka is located near the center of Iroquois County, at the intersection of U.S. Route 24 and Illinois Route 1. The Iroquois River winds along the north side of the town and is joined by Sugar Creek on the west side of town. The south half of the town is in Belmont Township; the north half is in Middleport Township. According to the 2010 census, Watseka has a total area of 3.05 square miles (7.90 km2), all land.

There were 2,314 households out of which 28.8% had children under the age of 18 living with them, 49.3% were married couples living together, 11.2% had a female householder with no husband present, and 35.9% were non-families. 31.2% of all households were made up of individuals and 15.8% had someone living alone who was 65 years of age or older. The average household size was 2.35 and the average family size was 2.93.

All content from Kiddle encyclopedia articles (including the article images and facts) can be freely used under Attribution-ShareAlike license, unless stated otherwise. Cite this article:
Watseka, Illinois Facts for Kids. Kiddle Encyclopedia.