Kankakee is a city in and the county seat of Kankakee County, Illinois, United States. The city's name is probably derived from the Miami-Illinois word teeyaahkiki, meaning: "Open country/exposed land/land in open/land exposed to view," in reference to the area's prior status as a marsh. As of the 2010 census, the city population was 27,537. Kankakee is a principal city of the Kankakee-Bourbonnais-Bradley Metropolitan Statistical Area and the Chicago–Naperville–Michigan City, IL-IN-WI Combined Statistical Area, which includes all of Kankakee County. 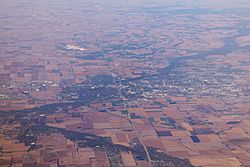 Aerial view of Kankakee. The confluence of Iroquois River and Kankakee River is visible on the left edge of the frame.

Kankakee is served by the Greater Kankakee Airport, a general aviation facility located in the southern portion of Kankakee.

The Kankakee Valley Airport Authority was formed in 1957. The location of the airport was chosen South of Kankakee in 1959. The Greater Kankakee Airport has been officially serving the Kankakee community since 1962. It is located 50 miles south of downtown Chicago and 70 miles north of Champaign, directly along Interstate 57 at the 308 exit. The airport is home to over 100 private hangars housing helicopter, singe engine aircraft, ultralights, and turbine powered aircraft.

In 1966 the main runway was expanded, successfully attracting a commercial carrier. Air Wisconsin, Inc. began operating in 1967. Due to the commercial operations the Airport was able to build the terminal building in 1968, which is still standing today.

The Greater Kankakee Airport made its Hollywood debut in the 1980 Steve McQueen movie "The Hunter," in which Ralph "Papa" Thorson comes to pick up the Trans Am at the airfield.

The Greater Kankakee Airport has received recognition over the years for its outstanding service to Kankakee County. The airport has been awarded the General Aviation – Publicly Owned Airport of the year award by the Illinois Division of Aeronautics in 2001 and 2012.

The airfield continues to serve the community today though general aviation. Over 100 private tenants and multiple businesses continue to utilize the field. In September 2013 the Army National Guard broke ground on the Army Aviation Support Facility, which will be completed in 2017. The facility will house 13 UH-60 Blackhawk helicopters. The Kankakee Valley Airport Authority looks forward to continue to support the surrounding area in the years to come.

Amtrak provides service to Kankakee from the Kankakee Amtrak Station. Amtrak operates the City of New Orleans, the Illini, and the Saluki with each train running once daily in both directions.

Kankakee Valley Park District has 37 parks, comprising a total of 600 acres (2.4 km2). Facilities include an outdoor aquatic park, indoor ice skating rink, 1000 seat recreation center, dog park, campground and a 72 boat slip marina on the beautiful Kankakee River. Fishing is plentiful as the district has 13 riverfront parks as well as a 5-acre stocked quarry. The district also features 2 softball complexes that have both been recently inducted into the Softball Hall of Fame. The KVPD is home to annual State and World Series tournaments drawing nearly 50,000 spectators throughout the year. The KVPD also hosts one of the biggest BBQ Festivals in the Midwest every July. The KVPD is the proud home to our area youth baseball leagues as several teams throughout the system have gone on not only to win State Championships but to advance to the Little League World Series. 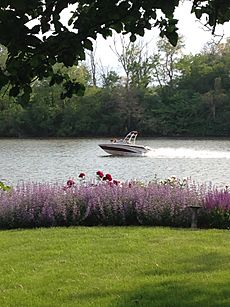 US 45 & 52 – South Washington Street crossing the Kankakee River in flood.

All content from Kiddle encyclopedia articles (including the article images and facts) can be freely used under Attribution-ShareAlike license, unless stated otherwise. Cite this article:
Kankakee, Illinois Facts for Kids. Kiddle Encyclopedia.