Vermilion County is a county located in the eastern part of the U.S. state of Illinois, between the Indiana border and Champaign County. It was established in 1826 and was the 45th of Illinois' 102 counties. According to the 2010 census, it had a population of 81,625, which is a decrease of 2.7% from 83,919 in 2000. It contains 21 incorporated settlements; the county seat and largest city is Danville. The county is also divided into 19 townships which provide local services.

Vermilion County is named after the Vermilion River, which passes through the county and empties into the Wabash River in Indiana near Cayuga; the river was so named because of the color of the earth along its route.

The area which became Vermilion County was under the flag of France from 1682 to 1763, as part of New France. It was owned by Great Britain for fifteen years after the French and Indian War; it then became part of the colonies after the Revolutionary War when the area was ceded to Virginia and was known as "the Illinois County of Virginia". Later it was part of the Indiana Territory, then the Illinois Territory, and finally the state of Illinois. The county was officially created on January 18, 1826 from a portion of Edgar County. There was an unorganized territory to the north and west which was attached to the county; Champaign and Iroquois counties were formed from part of this territory in 1833. The remainder was used to create Ford County in 1859; this was the last county to be formed in the state.

The existence of saline springs in the county proved to be a strong attraction to early white men, and were mentioned as early as 1801, when Joseph Barron, an interpreter fluent in a number of Native American languages, stated in an affidavit that he was present at the "Vermilion Salines" that year. The production required 100 gallons of water for one bushel of salt and proved to be profitable from the first run 1822 to 1829, when salt became less expensive and the venture was no longer economical.

The saline springs were also the site of the first settlement, made by Seymour Treat in 1819, along with the Beckwith and Whitcomb families. James Butler, from Ohio, followed in 1820 and settled in the Catlin area; within a few years, the settlement grew to encompass several families and became known as "Butler's Point". About the same time, the southern area of the county also attracted an early settler named Henry Johnson, who built a cabin approximately two miles west of Georgetown; this area later became known as "Johnson's Point". The southern portion of the county soon became populated with a number of cabins and small settlements. The majority of those coming to Vermilion County originated in the American South and left because of their opposition to slavery.

Some of the early settlers were of the Religious Society of Friends, or Quakers. Some of these settlers founded the settlement of Vermilion Grove in the south part of the county; it is not only one of the oldest settlements in the county but also the site of the second school in the county.

The county has strong ties to Abraham Lincoln. He practiced law in Danville from 1841 to 1859 with Ward Hill Lamon, who later served as his bodyguard. Lincoln also gave a brief speech in Danville in 1858 while campaigning for U.S. Senate against Stephen A. Douglas; Lincoln gave the speech in his stocking feet while standing on the balcony at the home of Dr. William Fithian, a prominent local physician. Today, the Fithian home is listed on the National Register of Historic Places and serves as the Vermilion County Museum; visitors can see Lincoln memorabilia including a bed in which Lincoln slept.

The maps below illustrate the various stages in the evolution of Vermilion County. 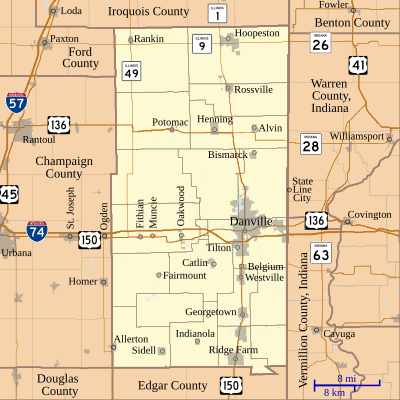 Vermilion County is located along the eastern border of Illinois; its northern border is about 95 miles (153 km) south of Chicago. The county is bordered on the north by Iroquois County. To the west are Champaign County and Ford County and to the south is Edgar County. The Indiana counties of Benton, Warren and Vermillion lie to the northeast, east and southeast, respectively.

The village of Allerton is in the far southwest corner of the county, with a small portion extending into Champaign County; Sidell is just east of Allerton. Alvin and Bismarck are both located to the north of Danville; further north, Rossville is on Route 1 south of Hoopeston. Going south from Danville, Route 1 passes through Tilton, Belgium, Westville, the city of Georgetown, and Ridge Farm.

West of Danville along U.S. Route 150 lie the villages of Oakwood, Muncie and Fithian; all are just to the south of Interstate 74. Potomac and Henning both lie along an east–west portion of U.S. Route 136 north of Danville. Fairmount, Catlin and Indianola all lie to the southwest of Danville. Rankin is in the far northwest corner of the county, near the intersection of Route 9 and Route 49.

There are at least a dozen communities in the county which are not incorporated.

Several towns were established in the county which no longer survive. In some cases, the coming of the railroads helped to define the best locations for settlements, and as a result some existing towns were abandoned. When Lake Vermilion was created, the old town of Denmark, to the northwest of Danville, was flooded and now lies at the bottom of the reservoir.

Township government was adopted in Vermilion County in 1851, and eight townships were created, listed below.

Eleven more townships, listed below, were created in the following decades. The final total was nineteen townships.

Vermilion County is in the humid continental climate region of the United States along with most of Illinois. Its Köppen climate classification is Dfa, meaning that it is cold, has no dry season, and has a hot summer. In recent years, average temperatures in the county seat of Danville have ranged from a low of 17 °F (−8 °C) in January to a high of 86 °F (30 °C) in July, although a record low of −26 °F (−32 °C) was recorded in January 1994 and a record high of 112 °F (44 °C) was recorded in July 1936. Average monthly precipitation ranged from 1.99 inches (51 mm) inches in February to 4.70 inches (119 mm) inches in June.

Interstate 74 enters Vermilion County from the west on its way from Champaign–Urbana, and passes just to the north of the towns of Fithian, Muncie and Oakwood before passing through the south edge of the Kickapoo State Park, the north edge of Tilton and the south edge of Danville. Continuing east, it leaves the county and the state on its way to Indianapolis.

U.S. Route 136, which runs across five states, passes into Vermilion County from the west on its way from Rantoul. It passes east through the towns of Armstrong, Potomac and Henning; it reaches Illinois Route 1 south of Rossville and then shares that highway's route as it passes south through Danville. At the south edge of Danville it reaches Main Street and resumes its eastward heading, leaving the east edge of Danville and passing out of the county and state on its way to Covington, Indiana.

U.S. Route 150 enters the county from Champaign–Urbana to the west, running just to the south of Interstate 74 and passing through the towns of Fithian, Muncie and Oakwood. Just west of Danville it crosses to the north side of Interstate 74 as that highway veers to the southeast. In downtown Danville, it meets Illinois Route 1 and U.S. Route 136, and follows Route 1 to the south and continues through the towns of Belgium, Westville, Georgetown and Ridge Farm before entering Edgar County further to the south.

Illinois Route 1 runs from the north to the south through the county, passing through Hoopeston, Rossville, Danville, Belgium, Westville, Georgetown and Ridge Farm. Illinois Route 9 runs from west to east near the north edge of the county and passes through Rankin and Hoopeston; upon reaching the Indiana border, Indiana State Road 26 continues its route to the east toward Lafayette, Indiana. Illinois Route 49 is a north–south highway near the western edge of the county. It passes south through Rankin where it intersects Route 9; further south it passes near Armstrong where U.S. Route 136 briefly shares its route. Crossing Interstate 74, it briefly shares the route of U.S. Route 150, running west for about 2 miles (3.2 km) and leaving the county before continuing south in Champaign County. Illinois Route 119 is a short 8-mile (13 km) east–west road that connects the intersection of Illinois Route 1 and U.S. Route 136 with Indiana State Road 28 at the state line.

Four railroad lines pass through or into the county, all intersecting in the Danville area; this results in many different railroad crossings throughout the city. A Norfolk Southern Railway line enters the county from Decatur to the southwest and passes through Danville on its way to Lafayette, Indiana to the northeast. CSX Transportation operates a north–south line through the county which connects with Chicago to the north and Terre Haute, Indiana further south via Paris. A Kankakee, Beaverville and Southern Railroad north–south line runs to the east of the CSX line, just a few miles from the state border, beginning in northern Iroquois County and running south through Danville, then veering east. The Vermilion Valley Railroad is a 6-mile (9.7 km) line that connects the Flex-N-Gate factory west of Covington, Indiana with CSX in Danville.

The Vermilion Regional Airport is located just northeast of Danville.

All content from Kiddle encyclopedia articles (including the article images and facts) can be freely used under Attribution-ShareAlike license, unless stated otherwise. Cite this article:
Vermilion County, Illinois Facts for Kids. Kiddle Encyclopedia.