Kids Encyclopedia Facts
Not to be confused with Champaign, Illinois.

Champaign County is a county in the U.S. state of Illinois. As of the 2020 census, its population was 205,865, making it the 10th-most populous county in Illinois. Its county seat is Urbana.

Champaign County is part of the Champaign–Urbana, IL Metropolitan Statistical Area. The twin cities of Urbana and Champaign are the only cities in the county, and they nearly surround the campus of the University of Illinois at Urbana–Champaign.

Champaign County was organized in 1833, having been previously a part of Vermilion County. The county and county seat were named for Champaign County, Ohio and Urbana, Ohio respectively, the homeplace of the Illinois legislator who sponsored the bill to create the county. The development of the county was greatly furthered by the arrival of the Chicago Branch of the Illinois Central Railroad, and even more by the establishment of the land-grant university. Later, the county also got an airport and a mass transit district. The northern part of the county experienced an economic and demographic setback with the closing of Chanute Air Training Center in the 1990s. In the 2004 Presidential election, it was one of only 15 of the 102 Illinois counties where John Kerry received a majority of the vote (50.98%).

Because Champaign County is situated on a large and very flat plateau, it had virtually no natural drainage, so that much of the County consisted of wetlands until drainage ditches were built, beginning in the 1870s. This was an example of an upland marsh, which resulted in a high incidence of malaria before the late nineteenth century.

The topography of Champaign County was formed by the Wisconsin Glacier about 20,000 years before the present. Lobes of ice from what is now Lake Michigan crossed the county, creating a deep pile of glacial soil, up to 300 feet thick, topped by numerous moraines forming small, flat watersheds with no outlets.

Champaign County is situated on the divide between the Ohio and Mississippi Rivers. Rivers flow out of Champaign County to the east, west, and south. The Kaskaskia River has its origin to the northwest of Champaign, draining the western side of that City. The Kaskaskia flows toward the southwest, joining the Mississippi south of St. Louis, Missouri.

The Embarras River, on the other hand, drains the south-central portion of the Champaign-Urbana Metropolitan Area, originating in southeastern Champaign and flowing through the experimental fields on the southern part of the campus of the University of Illinois. The Embarras is a tributary to the Wabash River and Ohio River systems. The northeast corner of Champaign, the central portion of the University campus, and the northern part of Urbana are drained by the Boneyard Creek, which flows into the Saline Ditch, a tributary of the Vermilion and Wabash rivers. 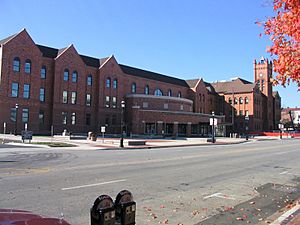 There are two train stations in Champaign County: The Illinois Terminal in downtown Champaign and Rantoul station in Rantoul. Both stations are served by the Amtrak Illini and Saluki trains, which operate once daily between Chicago and Carbondale. The Illinois Terminal is also served by the City of New Orleans, which operates once daily between Chicago and New Orleans. Amtrak passenger trains in Champaign County use the former Illinois Central mainline, which is owned by the Canadian National Railway and also used by freight trains.

The Norfolk Southern Railway operates two branch lines in Champaign County: the Mansfield Line from Urbana to Mansfield and the Lafayette District from Decatur to Peru, Indiana. Canadian National also operates branch lines from Champaign to Seymour and Rantoul to Dewey. Traffic on the branch lines is limited and consists primarily of freight. 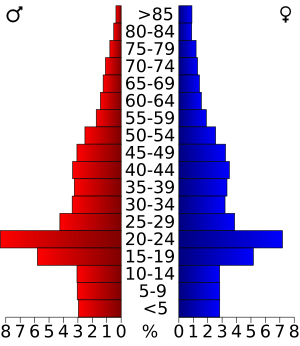 2000 census age pyramid for Champaign County with a marked mode for college-aged individuals due to the presence of the University of Illinois. 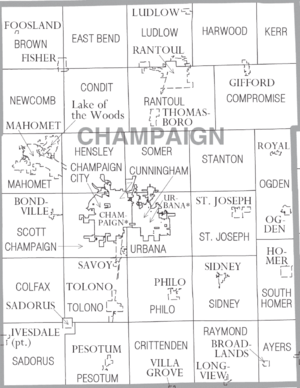 Supported by the University of Illinois, through backings such as the Research Park, and Champaign County leaders, the area has shown even more growth in Information Technology, Micro/Nanotechnology, Bio-Imaging, Healthcare, Logistics, Distribution, and Agribusiness in recent years.

All content from Kiddle encyclopedia articles (including the article images and facts) can be freely used under Attribution-ShareAlike license, unless stated otherwise. Cite this article:
Champaign County, Illinois Facts for Kids. Kiddle Encyclopedia.