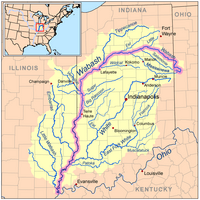 A map of the river

The Wabash River /ˈwɔːbæʃ/ (French: Ouabache) is a 503-mile-long (810 km) river in the Midwestern United States that flows southwest from northwest Ohio near Fort Recovery across northern Indiana to southern Illinois.

It forms the Illinois-Indiana border before draining into the Ohio River, of which it is the largest northern tributary. From the dam near Huntington, Indiana to its terminus at the Ohio River, the Wabash flows freely for 411 miles (661 km).

All content from Kiddle encyclopedia articles (including the article images and facts) can be freely used under Attribution-ShareAlike license, unless stated otherwise. Cite this article:
Wabash River Facts for Kids. Kiddle Encyclopedia.