Covington is a city in and the county seat of Fountain County, Indiana, United States. The population was 2,645 at the 2010 census. 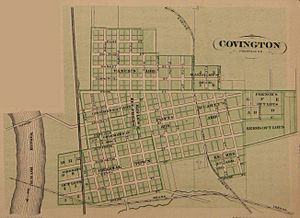 Map of Covington from 1876 atlas

Fountain County was formed on April 1, 1826. Later that year, the county seat was established at Covington, and a two-story frame courthouse was built in 1827. The location of the county seat was a point of contention for some years, as Covington was not centrally located in the county. In 1831 an act was passed that called for the relocation of the county seat, but after further discussion it was decided that it should remain where it was. Eventually the coming of the railroads helped to alleviate the geographical concern. A brick courthouse was completed in 1833. 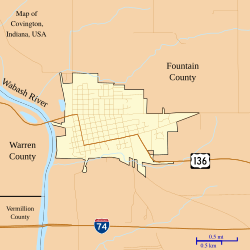 Covington is the home of the Midwest's first indoor beach: Inspired by Nature. It is a 30' x 44' space filled with sixty-five tons of sand. Available activities include digging in the sand for shark teeth and seashells, volleyball, and playing with a large assortment of sand toys.

All content from Kiddle encyclopedia articles (including the article images and facts) can be freely used under Attribution-ShareAlike license, unless stated otherwise. Cite this article:
Covington, Indiana Facts for Kids. Kiddle Encyclopedia.