Fountain County lies in the western part of the U.S. state of Indiana on the east side of the Wabash River. The county was officially established in 1826 and was the 53rd in Indiana. The county seat is Covington.

According to the 2000 census, its population was 17,954; the 2010 population was 17,240. The county has eight incorporated towns with a total population of about 9,700, as well as many small unincorporated communities; it is also divided into eleven townships which provide local services. An interstate highway, two U.S. Routes and five Indiana state roads cross the county, as does a major railroad line.

The state of Indiana was established in 1816. The first non-indigenous settler in the area that became Fountain County is thought to have been a Mr. Forbes, who arrived here in early 1823 and was soon followed by others. Fountain County was officially created on December 30, 1825, the act taking effect on April 1, 1826; the boundaries of the county have not changed since that time. It was named for Major James Fontaine of Kentucky who was killed at Harmar's Defeat (near modern Fort Wayne, Indiana) on October 22, 1790, during the Northwest Indian War. 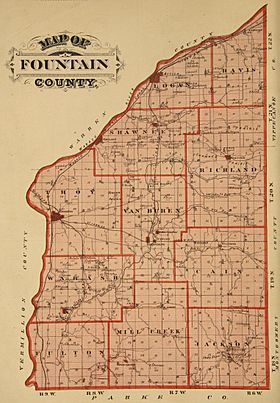 Map of Fountain County from an 1876 atlas

The first Fountain County courthouse was a two-story frame building constructed in Covington in 1827; Abraham Griffith submitted the winning bid of $335. Two years later in 1829 it was decided that a brick building was needed, and plans were made for a new courthouse; but then an act of the legislature called for the county seat to be moved. In the end it was decided that the county seat should remain in Covington, and the brick courthouse was completed in 1833. A third courthouse was commissioned in 1856, and was completed in 1857 at a cost of $33,500. The circuit court met for the first time in the new building in January 1860, and the building was largely destroyed by fire the same day. Isaac Hodgson was the architect for the rebuilt courthouse, which was first occupied in January 1861; the total cost, including the reconstruction, totaled $54,624.05. The current courthouse was built in 1936–37 at a cost of $246,734; it replaced the previous building which had been declared unsafe. It was constructed by the Jacobson Brothers of Chicago; the architects were Louis R. Johnson and Walter Scholar of Lafayette. The courthouse walls display many murals painted by Eugene Francis Savage and others from 1937 to 1940; the murals cover over 2,500 square feet (232 m2) of wall space and depict the settlement of western Indiana.

Construction on the Wabash and Erie Canal began in 1832 and worked southwest; it reached Lafayette by 1842. In 1846 it reached Covington, and by 1847 traffic had begun to flow through the county via the canal. Although the coming of the county's first railroad a decade later heralded the end of the canal's usefulness, it wasn't until 1875 that the last canal boat passed through Covington.

The first railroad through the county was the Toledo, Wabash and Western Railway (later the Wabash Railroad) which was built from the east across the northern part of the county and reached Attica in 1856; it continued west through Warren County and reached the Illinois state line the following year. Another line, the Indianapolis, Crawfordsville and Danville Railroad (later the Indiana, Bloomington and Western Railway), was started in 1855, but the general state of the economy halted construction in 1858. It was completed by another owner in 1870, and trains began operating on it in 1871; locally, it ran through Covington, Veedersburg and Hillsboro. 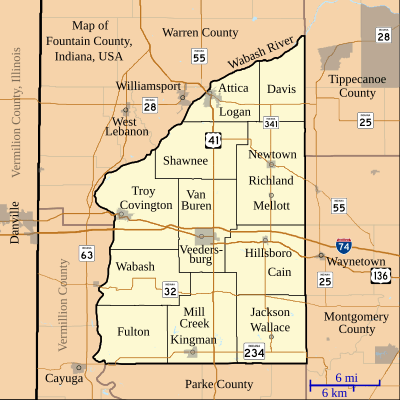 Fountain County's northern and western borders are defined by the Wabash River which flows out of Tippecanoe County to the northeast. Across the river to the northwest lies Warren County, beyond which is the state of Illinois; to the southwest, Vermillion County also shares the river as part of its border. Parke County is directly to the south, and Montgomery County is to the east. The state capital of Indianapolis lies about 60 miles (97 km) to the east.

Fountain County contains eight incorporated settlements. The largest is the city of Attica with a population of 3,491. It lies in the north part of the county on the southeastern banks of the Wabash River; U.S. Route 41, State Road 28, and State Road 55 all run through Attica. The county seat of Covington is the second-largest at 2,645; it is also on the Wabash, about 10 miles (16 km) downstream and southwest of Attica on U.S. Route 136, just north of Interstate 74. Third in size is Veedersburg at 2,299; it is near the center of the county where U.S. Route 41, U.S. Route 136, and Interstate 74 intersect.

The remaining towns all have populations under 1,000. Newtown, Mellott, Hillsboro and Wallace all lie along the route of State Road 341 which runs from north to south in the eastern part of the county. Kingman is in the far south part of the county on State Road 234, about 1 mile (1.6 km) west of U.S. Route 41.

In addition to the eight incorporated cities and towns, there are also many small unincorporated settlements. Cates and Silverwood are in Fulton Township in the southwest corner of the county. To the east of Fulton, Mill Creek Township includes Harveysburg, Steam Corner (at the intersection of U.S. Route 41 and State Road 32) and Yeddo (north of Kingman). North of Fulton, Wabash Township has the town of Coal Creek. Van Buren Township, which contains Veedersburg, also includes Stone Bluff; and Shawnee Township to the north of Van Buren holds the hamlets of Fountain (on the banks of the Wabash) and Rob Roy (at the intersection of U.S. Route 41 and State Road 55). The town of Riverside is across the river from Independence in Warren County, and lies in Davis Township.

Stringtown was a mining settlement south of Covington in Wabash Township in the late 19th century, but it no longer exists. There are several coal mines in Fountain County, especially in the southwest.

About 7 miles (11 km) southwest of Attica along the Wabash River lies Portland Arch Nature Preserve and the Miller-Campbell Memorial Tract, a 435-acre (176 ha) preserve managed by the Indiana Department of Natural Resources. It is immediately to the south of the small town of Fountain.

The town of Mellott

Looking across the Wabash River to Fountain County 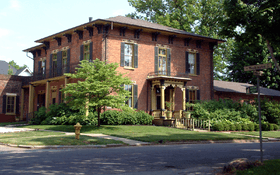 A 19th-century home in Attica

Attica from the west

Interstate 74 is a four-lane divided highway which passes from east to west through the middle of Fountain County, on its way from Indianapolis in the east to Illinois in the west. U.S. Route 136 is a two-lane road which follows the same general route as I-74 through the county; in the eastern part it runs on the south side of the interstate, but crosses to the north side between Veedersburg and Covington. U.S. Route 41 is a north–south highway which enters from Warren County in the north and passes through Attica, then goes directly south through Veedersburg and on toward Terre Haute.

A Norfolk Southern Railway line runs across the north end of the county on its route between Danville, Illinois and Lafayette; it carries about 45 freight trains each day.

Fountain County is in the humid continental climate region of the United States along with most of Indiana. Its Köppen climate classification is Dfa, meaning that it is cold, has no dry season, and has a hot summer. In recent years, average temperatures in the county seat of Covington have ranged from a low of 15 °F (−9 °C) in January to a high of 85 °F (29 °C) in July, although a record low of −26 °F (−32 °C) was recorded in January 1994 and a record high of 105 °F (41 °C) was recorded in August 1988. Average monthly precipitation ranged from 1.80 inches (46 mm) inches in February to 4.53 inches (115 mm) inches in June.

From 1950 through 2009, six tornadoes were reported in Fountain County; none resulted in any deaths, but the estimated property damage totaled more than $25 million.

All content from Kiddle encyclopedia articles (including the article images and facts) can be freely used under Attribution-ShareAlike license, unless stated otherwise. Cite this article:
Fountain County, Indiana Facts for Kids. Kiddle Encyclopedia.