It has a population density of about 39 inhabitants per square mile (15/km2). The county contains six incorporated towns and many unincorporated communities. It is divided into 13 townships which provide local services.

Two U.S. Routes and five state highways pass through or into the county, along with one major railroad line.

As of 2020, Parke County is included in the Terre Haute, Indiana, Metropolitan Statistical Area.

This area had been occupied for thousands of years by succeeding cultures of indigenous peoples. The first European settlement of the western area of Indiana along the Wabash River was by French-Canadian colonists, who founded Vincennes in 1703.

After the Seven Years' War, France ceded its territory in North America to Great Britain. In turn, after the American Revolutionary War, the Crown ceded this territory east of the Mississippi River to the new United States, including land it did not control, which was occupied by Native American nations.

In 1811 the Shawnee chief Tecumseh rallied several tribes to try to expel the European-American settlers from the area. When General William Henry Harrison took an army from Vincennes to the Battle of Tippecanoe in late 1811 to fight with the Indians, Zachariah Cicott served as a scout. Cicott had traded with Indians up and down the Wabash River, starting around 1801. The trail taken by Harrison's army, on its way to and from the battle site in Tippecanoe County, passed through the area that later became Parke County. The settlement of Armiesburg in Wabash Township was so named because Harrison and his army crossed the Raccoon Creek and camped near there on their way to the battle.

Formed on January 9, 1821 from a portion of Vigo County, Parke County was formed by an act approved by the state legislature. It was named for Captain Benjamin Parke, who commanded a troop of light Dragoons at the Battle of Tippecanoe. Parke was elected as a delegate of Indiana Territory to the U.S. Congress. In 1821, he was appointed as U.S. District Judge for Indiana.

First located at Roseville, the county seat was relocated to Armiesburg. In 1822, the county settled on Rockville as the permanent location. The state act had called for construction of county buildings to start within one year of the county's formation; but in the event, it did not start until 1824. The first courthouse was completed on the Rockville town square in 1826. The log structure doubled as a church. 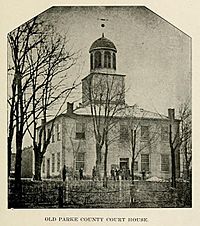 In 1832 the log building was replaced by a brick structure, which served for more than 40 years until 1879, when it was demolisted for replacement by a new stone courthouse. The architects for this building were Thomas J. Tolan and his son Brentwood of Fort Wayne; they designed seven Indiana courthouses, as well as several in Ohio, Iowa, Illinois and Tennessee.

Construction of the courthouse at Rockville was completed in 1882 at a cost of about $79,000. Items deposited in the cornerstone included documents of the town's history, postage stamps, several varieties of grain grown in the county, coins, and photographs. A dedication ceremony took place on February 22, 1882, the anniversary of George Washington's birthday. The clock and bell were added later at a cost of about $1,500.

The Wabash and Erie Canal was completed through the area around 1850 and ran through Parke County on the east side of the Wabash River. It served several communities along the banks of the river until it was discontinued in the 1870s. 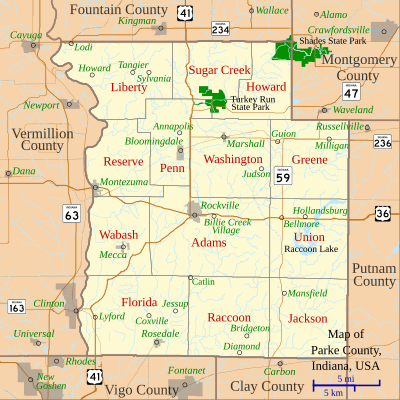 The entire county is within the drainage area of the Wabash River. North of Rockville, the gently undulating land is glacial till resulting from Wisconsinan glaciation. The Shelbyville moraine divides this from the nearly level Illinoisan till plain in the south part of the county.

Turkey Run State Park is located in northern Parke County. It was set aside as one of Indiana's first state parks and consists of 2,382 acres (964 ha) of land. The county also contains a portion of Shades State Park, a 3,082-acre (1,247 ha) park about 5 miles (8.0 km) northeast of Turkey Run; the majority of Shades is located in Montgomery County.

Historically a rural county with extensive agriculture, today Parke County's economy is supported by a labor force of approximately 8,050 workers. The unemployment rate in November 2011 was 9.6%.

Warder Clyde Allee was born in Bloomingdale in 1885. He attended Earlham College and the University of Chicago, studying zoology and ecology and receiving his Ph.D. in 1912. He taught, conducted research, and wrote a number of books; among other accomplishments, he identified what became known as the Allee effect. He died in Gainesville, Florida, in 1955 at age 69.

Gordon Allport was born in Montezuma in 1897; when he was six years old, his family moved to Ohio. He attended Harvard University and received a Ph.D. in psychology in 1922; his focus was on personality traits. He began teaching at Harvard in 1924, and published a number of works in the following years. He died in Cambridge, Massachusetts in 1967 at the age of 69.

William Henry Harrison Beadle was born in a log cabin in Parke County in 1838. His father offered him a farm, but he accepted $1,000 for an education instead and studied civil engineering at the University of Michigan. He fought in the Civil War on the side of the Union and became a brigadier general. After the war, he was named surveyor-general of the Dakota Territory. Later he became president of the Madison State Normal School (now Dakota State University), then taught geography there after his presidency. He died in 1915 at the age of 77.

Baseball great Mordecai Brown was born in the unincorporated town of Nyesville in Parke County on October 19, 1876. He lost parts of two fingers on his right hand in a farm machinery accident, hence his later nickname "Three Finger". He was also called "Miner" because he had worked in coal mines in western Indiana before his baseball career. He began in the minor leagues in Terre Haute in 1901 and joined the major leagues in 1903, retiring in 1916. He died in Terre Haute in 1948 at age 71.

Grover Jones was born in Rosedale in 1893 and grew up in the Terre Haute area. He became a short story writer, screenwriter, and film director, writing for over 100 films. He died in Hollywood, California, in 1940 at age 46.

Knute Cauldwell was born in Parke County and played in the early years of the National Football League.

All content from Kiddle encyclopedia articles (including the article images and facts) can be freely used under Attribution-ShareAlike license, unless stated otherwise. Cite this article:
Parke County, Indiana Facts for Kids. Kiddle Encyclopedia.