Vigo County ( VEE-goh or VY-goh) is a county located along the western border of the U.S. state of Indiana. According to the 2010 census, the population was 107,848. The county seat is Terre Haute.

The county contains four incorporated settlements with a total population of nearly 63,000, as well as several unincorporated communities. It is divided into twelve townships which provide local services to the residents.

Sullivan County was formed in 1817, and the area that later became Vigo County was part of it until 1818, when the county was created by an act of the Indiana General Assembly which took effect on February 1. Its borders changed several times; in 1821, part of the county was formed into Parke County, and later that year Putnam County was formed which also affected Vigo's borders. The final change came in 1873 when the present boundaries were defined. The county is named in honor of Colonel Francis Vigo, of Italian heritage but a citizen of Spain due to residence in St. Louis. He is credited with great assistance to George Rogers Clark both in financing Clark's exploration and American Revolutionary War efforts, and in service as an agent obtaining military information for Clark against British campaigns on the then frontier. 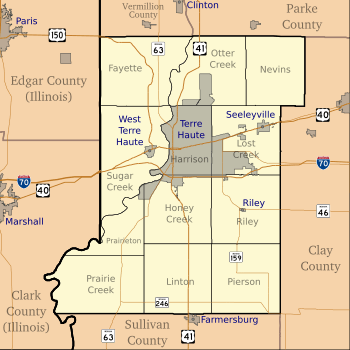 To the north of Vigo County, the Wabash River defines the boundary between Vermillion and Parke counties; the river then enters Vigo County and winds to the south-southwest, defining the southern portion of the county's western border before continuing south along Sullivan County's western border. Vigo County is thus the southernmost county in Indiana on the right bank of the Wabash. Clay County lies to the east. Across the state line are Edgar County to the northwest and Clark County to the southwest. According to the 2010 census, the county has a total area of 410.45 square miles (1,063.1 km2), of which 403.31 square miles (1,044.6 km2) (or 98.26%) is land and 7.14 square miles (18.5 km2) (or 1.74%) is water.

In 1819, the year after the county was formed, it was divided into four townships: Honey Creek, Wabash, Harrison and Independence. Prairie Creek Township was formed later that year. In the following years more townships were formed and township borders were altered several times. Otter Creek, Raccoon and Sugar Creek townships were created in 1820, and Independence Township became known as Paris Township. Raccoon and Wabash townships became part of Parke County when it was split from Vigo County in 1821. Nevins and Riley were formed in 1822. In 1824, Paris Township was renamed again to Fayette Township. Pierson Township was created in 1829, then Lost Creek in 1831, then Linton in 1841 and finally Prairieton in 1857, for a total of twelve townships.

Interstate 70 passes through the southern part of Terre Haute from east to west on its way from Indianapolis to Saint Louis, Missouri; U.S. Route 40 roughly parallels Interstate 70 and passes through the middle of the city. Both highways intersect U.S. Route 41, coming from Chicago to the north; U.S. Route 150 enters from Paris, Illinois to the northwest and joins U.S Route 41 in downtown Terre Haute, and both continue south toward Vincennes.

(* SR 641 is currently under construction. Its current route begins at US 41 and ends at McDaniel Road.)

Several CSX Transportation railroad lines meet in Terre Haute; one enters from the north, another from the Indianapolis area, and another from Vincennes; and two others enter from Illinois. There is also an Indiana Rail Road line which runs southeast from Terre Haute toward Bedford.

All content from Kiddle encyclopedia articles (including the article images and facts) can be freely used under Attribution-ShareAlike license, unless stated otherwise. Cite this article:
Vigo County, Indiana Facts for Kids. Kiddle Encyclopedia.