The Vigo County Courthouse is a courthouse in Terre Haute, Indiana. The seat of government for Vigo County, the courthouse was placed on the National Register of Historic Places in 1983.

Vigo County was formed in 1818 by the Indiana General Assembly and construction of the county's first courthouse began that year. In the meantime, the temporary courthouse was the Eagle and Lion Tavern on the corner of Wabash Avenue and Second Street. 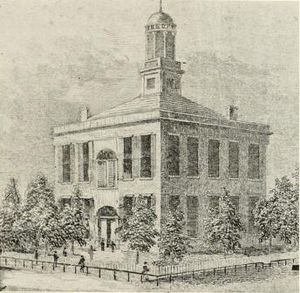 This original structure was brick with a broad arched transom and an interior with elevated box seats and steps. A center aisle ran through the center of the building, dividing the structure into a south side dedicated to seating and a north side for the express use of the court and room for a judge's bench, lawyers' tables and a jury box.

The bottom floor of the courthouse was completed in 1822 and quickly became the place for court business, political gatherings, elections, public town meetings, lectures, sermons and more. Sometime in 1834-35, Joseph Smith and Sidney Rigdon held meetings there defending the fledgling Latter Day Saint movement. In the 1850s, George W. Julian delivered an Abolition speech in the courthouse, where an angry mob gathered to prevent him from speaking but eventually departed.

On July 4, 1832, Colonel Francis Vigo, the county's namesake, traveled from his home in Vincennes, Indiana, to visit Terre Haute and the urging of some of its prominent citizens. Impressed by the city, Vigo remembered the courthouse in his will (dated December 9, 1834) by a gift of $500 to Vigo County to be used "in the purchase of a bell for the courthouse of said county, on which will be inscribed 'Presented by Francis Vigo.'"

Need for a new courthouse

This structure served until 1866. In 1868, the structure was declared unfit for use. A temporary courthouse was established in a four-story brick building on the corner of Third and Ohio streets until a more permanent structure could be built. It was assumed that the original courthouse would be fixed and return to use, but this never occurred, and the temporary structure ended up being used for 22 years. The building of a new courthouse was stalled in part by squabbling among the city council and a special election in May 1871 in which the vote was 450 for and nearly 4,000 against the project, where it was then ordered that no new courthouse be built at that time. 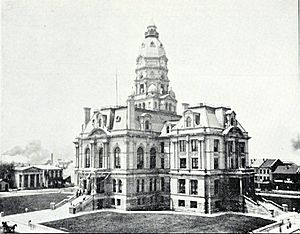 The Vigo County Courthouse, circa 1894.

Work began on the current structure when a 10,000-pound cornerstone was laid on August 28, 1884, with ceremonies sponsored by the Freemasons with a principal address by the Honorable D. W. Voorhees. This event was attended by many from the surrounding country as well as adjacent towns in Illinois.

Designed by Cincinnati architect Samuel Hannaford, the building was constructed by the Terre Haute Stone Company at a cost of $443,000. The courthouse is made from Indiana limestone gathered from Stinesville, Indiana quarries. Cast-iron work in the roof and dome as well as windows and cresting were completed by Phoenix Foundry and Machine Works.

Originally, the main floor consisted of offices, with two large, high-ceiling courtrooms on the second floor. Elegantly finished and furnished, the courthouse was heated with steam from a detached building to the south and featured a hydraulic elevator.

In accordance with the will of Francis Vigo, the courthouse features a two-ton bell made in 1887. The bell was bought for $2,500, partially funded by the money left in Vigo's will.

The courthouse is of similar style to the Vanderburgh County Courthouse.

All content from Kiddle encyclopedia articles (including the article images and facts) can be freely used under Attribution-ShareAlike license, unless stated otherwise. Cite this article:
Vigo County Courthouse Facts for Kids. Kiddle Encyclopedia.