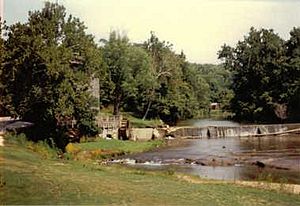 The village was originally named New Dublin by James Kelsey in 1820, and within a couple of years the village was called Dickn's Mills, and then Strain's Mills before it became known as Mansfield in the 1930s.

The village of Mansfield prospered and grew because of a roller mill that was built by James Kelsey and Francis Dickson, in 1820. As the milling industry became popular the village grew into a thriving town of more than 300 people. A sash mill and carding mill were added, and the little town grew with the addition of a general store, blacksmith, cooperage, and wagon maker. As the population expanded, a church and a school were organized.

All content from Kiddle encyclopedia articles (including the article images and facts) can be freely used under Attribution-ShareAlike license, unless stated otherwise. Cite this article:
Mansfield, Indiana Facts for Kids. Kiddle Encyclopedia.