Rockville is a town in Adams Township, Parke County, in the U.S. state of Indiana. The population was 2,607 at the 2010 census. The town is the county seat of Parke County. It is known as "The Covered Bridge Capital of the World".

Rockville was laid out in 1824, three years after the county was founded, and became the county seat. In 1825, its population was between 500 and 600. The residents voted to incorporate the town in July 1854.

The Rockville Chautauqua Pavilion and Rockville Historic District are listed on the National Register of Historic Places. 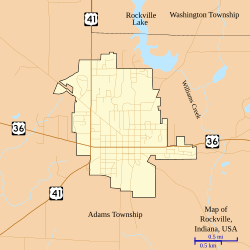 Rockville is located at the intersection of U.S. Route 36 and U.S. Route 41, about 30 miles (48 km) southwest of Crawfordsville.

The climate in this area is characterized by hot, humid summers and generally mild to cool winters. According to the Köppen Climate Classification system, Rockville has a humid subtropical climate, abbreviated "Cfa" on climate maps.

The town has a lending library, the Rockville Public Library.

All content from Kiddle encyclopedia articles (including the article images and facts) can be freely used under Attribution-ShareAlike license, unless stated otherwise. Cite this article:
Rockville, Indiana Facts for Kids. Kiddle Encyclopedia.