Crawfordsville is a city in Montgomery County in west central Indiana, United States, 49 miles (79 km) west by northwest of Indianapolis. As of the 2010 census, the city had a population of 15,915. The city is the county seat of Montgomery County, the only chartered city and largest populated place in the county. Crawfordsville is part of a broader Indianapolis combined statistical area, although the Lafayette metropolitan statistical area is only 30 miles (48 km) north. It is home to Wabash College, which was ranked by Forbes as #12 in the United States for undergraduate studies in 2008.

The city was founded in 1823 on the bank of Sugar Creek, a southern tributary of the Wabash River and named for U.S. Treasury Secretary William H. Crawford. 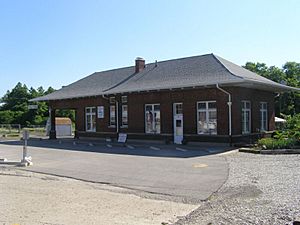 In 1813, Williamson Dunn, Henry Ristine, and Major Ambrose Whitlock noted that the site of present-day Crawfordsville was ideal for settlement, surrounded by deciduous forest and potentially arable land, with water provided by a nearby creek, later named Sugar Creek. They returned a decade later to find at least one cabin built. In 1821, William and Jennie Offield had built a cabin on a little creek, later to be known as Offield Creek, four miles southwest of the future site of Crawfordsville.

Major Whitlock laid out the town in March 1823. Crawfordsville was named in honor of Colonel William H. Crawford, a native Virginian who was the cabinet officer who had issued Whitlock's commission as Receiver of Public Lands.

According to a diary of Sanford C. Cox, one of the first schoolmasters in the area, in 1824: "Crawfordsville is the only town between Terre Haute and Fort Wayne... Maj. Ristine keeps tavern in a two-story log house and Jonathan Powers has a little grocery. There are two stores, Smith's near the land office, and Issac C. Elston's, near the tavern... David Vance [is the] sheriff.

It was successfully incorporated as a town in 1834, following a failed attempt three years earlier.

In November 1832, Wabash College was founded in Crawfordsville as "The Wabash Teachers Seminary and Manual Labor College". On December 18, 1833, the Crawfordsville Record carried a paid announcement of the opening of this school.

Today, it is one of only three remaining all-male liberal arts colleges in the country, and has a student body of around 900.

Crawfordsville grew in size and amenities, adding such necessities as a bank and fire department. It gained status as a city in 1865, when Indiana granted its charters.

In 1862, Joseph F. Tuttle, after whom Tuttle Grade School was named in 1906 and Tuttle Junior High School (now Crawfordsville Middle School) was named in 1960, became President of Wabash College and served for 30 years. "He was an eloquent preacher, a sound administrator and an astute handler of public relations." Joseph Tuttle, together with his administrators, worked to improve relations in Crawfordsville between "Town and Gown".

Several future and past Civil War generals lived in Crawfordsville at different times. Generals Lew Wallace and Mahlon D. Manson spent most their lives in the town. Generals Edward Canby and John P. Hawkins spent some of their youth in Crawfordsville. General Henry B. Carrington lived in the town after the war, and taught military science at Wabash College. Several other future generals were students at Wabash before the war, including Joseph J. Reynolds, John C. Black (brevet brigadier), Speed S. Fry, Charles Cruft, and William H. Morgan.

In 1880, prominent local citizen Lew Wallace produced Crawfordsville's most famous literary work, Ben-Hur: A Tale of the Christ, a historical novel dealing with the beginnings of Christianity in the Mediterranean world. In addition to Wallace, Crawfordsville lived up to its nickname "The Athens of Indiana" by being the hometown of a number of authors, including Maurice Thompson, Mary Hannah Krout, Caroline Virginia Krout, Susan Wallace, Will H. Thompson, and Meredith Nicholson.

In 1882, one of the first Rotary Jails in the country opened. It served from 1882 until 1972. The jail is now a museum and listed on the National Register of Historic Places. 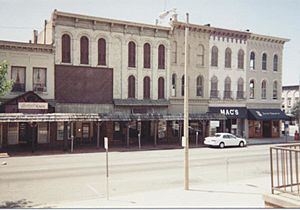 Washington and Main street, 1997. Western half of the 100 block of East Main Street, as seen from courthouse.

The beginning of the 20th century marked important steps for Crawfordsville, as Culver Union Hospital and the Carnegie Library were built in 1902. Culver operated as a not-for-profit, municipally-owned facility for 80 years, was then sold to for-profit American Medical International, and in 1984 was relocated from its original location near downtown to a new campus north of the city. The hospital's ownership was transferred to Sisters of St. Francis Health Services, Inc. in 2000 and renamed St. Clare Medical Center; in 2011, it was again renamed Franciscan St. Elizabeth Health - Crawfordsville. The Carnegie Library was converted into a local museum and the public library has since moved across the street. In 1911, Crawfordsville High School (motto: Enter to Learn, Go Forth to Serve) was founded, and promptly won the state's first high school basketball title. Crawfordsville's major employer for much of the century, commercial printer RR Donnelley, began operations in Crawfordsville in 1922.

Recent history has held few nationally noteworthy events for the city, but much internal change. Nucor Steel, Alcoa CSI, Raybestos Products Company, Pace Dairy Foods, and Random House have all created factories in or near Crawfordsville which provided employment to much of the population. Manpower has taken over as the primary employer in the city and has allowed most of the local companies to reduce employees. In 2008, Raybestos laid off the majority of its workforce with less than 100 employees left. Wabash College won the Division III NCAA basketball title in 1982. The college plays an annual football game against Depauw University for the Monon Bell, one of the oldest rivalries in all college sports. In 1998, the state began a proposed project to widen U.S. Route 231, in an attempt to ease intrastate travel flow.

In 2005, the Crawfordsville District Public Library moved into a new building across the street from the city's Carnegie library. The library retained ownership of the old building and re-opened it as the Carnegie Museum of Montgomery County in 2007.

On May 8, 2007, approximately a quarter-block of historic buildings in the 100 block of South Washington Street was burned in a major fire. A woman in one of the buildings reported the fire. One person, Leslie Eric Largent, died in the fire. The fire was covered by the press statewide. Two buildings, built circa 1882, were completely destroyed: one that housed the Silver Dollar Bar (formerly Tommy Kummings' Silver Dollar Tavern); the other contained the New York Shoe Repair and Bargain Center at the corner of Pike and Washington streets. Above the shoe store were several apartments where residents were sleeping. On May 22, the fire was ruled to have been an act of arson.

An alleged monster was seen here in the late 19th century that became known as the Crawfordsville monster. It was described to be made of a cloud with red glowing eyes. It is now believed to have been a flock of birds huddled together in confusion due to the town's newly installed electric street lights. The story was featured in The History Channel's television series Monster Quest, in an episode featuring unidentified flying creatures.

There were 6,396 households, of which 30.3% had children under the age of 18 living with them, 40.8% were married couples living together, 13.6% had a female householder with no husband present, 5.6% had a male householder with no wife present, and 40.0% were non-families. 33.7% of all households were made up of individuals, and 14% had someone living alone who was 65 years of age or older. The average household size was 2.31 and the average family size was 2.91.

Currently, Amtrak provides service to Crawfordsville. Amtrak Train 51, the westbound Cardinal, is scheduled to depart Crawfordsville at 7:28 am on Monday, Thursday, and Saturday. The train goes to Lafayette, Rensselaer, Dyer, and Chicago Union Station to connect with other trains.

Until 1967, passenger service was provided by the Monon Railroad, providing service to Chicago, Lafayette, Greencastle, and Bloomington, Indiana. The Monon railroad was merged into the Louisville and Nashville Railroad in 1971.

Crawfordsville is served by the Crawfordsville Regional Airport (KCFJ). Located four miles (6.4 km) south of the city, the airport handles approximately 6,383 operations per year, with 100% general aviation and <1% air taxi. The airport has a 5,505-foot (1,678 m) asphalt runway with approved GPS and NDB approaches (Runway 4-22). 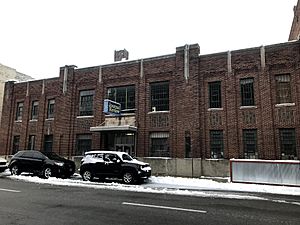 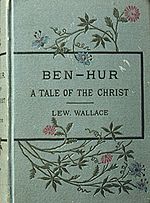 Ben-Hur: A Tale of the Christ by Lew Wallace

All content from Kiddle encyclopedia articles (including the article images and facts) can be freely used under Attribution-ShareAlike license, unless stated otherwise. Cite this article:
Crawfordsville, Indiana Facts for Kids. Kiddle Encyclopedia.