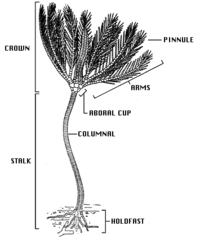 The Crinoids are a class of Echinoderms. They have two forms, the sea lilies, stalked forms attached to the sea floor, and the feather stars, which are free-living.

All crinoids are marine, and live both in shallow water and in depths as great as 6000 meters. The basic echinoderm pattern of fivefold symmetry can be recognized, but most crinoids have many more than five arms. Crinoids have a mouth on the top surface that is surrounded by feeding arms.

The crinoids have a long history. They were the first echinoderms to appear in the fossil record, and have kept their early structure throughout their long career. They were extremely common in the Palaeozoic, and some rocks from the Carboniferous consist almost entirely of fossil crinoids.

Crinoids' mouths faces up towards the surface of the ocean, and the stalked forms feed on the detritus which comes down to the bottom. The mouth is surrounded by many feathery tentacles. They have a U-shaped gut, and their anus is located next to the mouth. 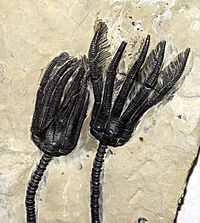 A typical crinoid fossil, showing (from bottom to top) the stem, calyx, and arms with cirri

The crinoids were almost wiped out by the extinction event at the end of the Palaeozoic era. Four whole classes became extinct, and the few that survived became the only living class, the Articulata. The stalked members of the class sufered from heavy predation in the Mesozoic. and now all the remaining sea lilies are in deep water, where the competition is less fierce. The feather stars have been much more successful.

In 2005, a stalked crinoid was recorded pulling itself along the sea floor off the Grand Bahama Island. The recording showed a crinoid moving at much faster speeds than was thought possible. 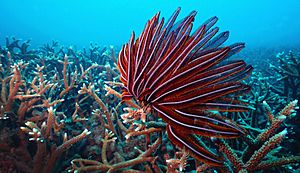 The free-living feather stars first appear in the Upper Triassic. They are related to starfish. As juveniles, they are attached to the sea bottom by a stalk, as their ancestors were. In the adult stage they break away from the stalk and can move about. Some can swim by undulating movements of the arms. Usually, feather stars creep about by using projections at the bottom of the crown, called cirri. They are the only crinoids in shallow water, and are all in the Order Comatulidae. Their flexible arms and ability to choose their feeding grounds was undoubtedly important in their success and survival.p293

During the day, they roll into a ball. But at night, they spread out their arms to catch plankton.

Feather stars arrange themselves so the fan faces the flow of the current. The posture serves to present the maximum area of food-collecting surfaces to the incoming water flow, so that more particles will settle on them. They are found mostly in shallow water.

All content from Kiddle encyclopedia articles (including the article images and facts) can be freely used under Attribution-ShareAlike license, unless stated otherwise. Cite this article:
Crinoidea Facts for Kids. Kiddle Encyclopedia.