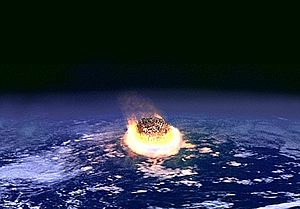 Artist's impression of a major impact event: A collision between Earth and an asteroid a few kilometres in diameter would release as much energy as several million nuclear weapons detonating.

The Permian/Triassic extinction event (P/Tr for short) was the largest extinction event in the Phanerozoic eon. 96% of all marine species and 70% of terrestrial vertebrates became extinct. It ended the Palaeozoic era, and began the Mesozoic era.

The event forms the boundary between the Permian and Triassic periods, at about 252 million years ago. Because so much biodiversity was lost, the recovery of life on earth took much longer than after other extinction events. This event has been described as the "mother of all mass extinctions". The pattern of extinction is still unclear, as different studies suggest one to three different pulses.

There are several proposed mechanisms for the extinctions. These include: large or multiple meteorite impacts, increased volcanism, sudden release of methane hydrates from the sea floor. Gradual changes include sea level change, oceanic anoxic events, increasing aridity, and a shift in ocean circulation driven by climate change.

One thing is probably significant. One of the largest ever flood basalt eruptions took place across the P/Tr junction. These eruptions, from 251 to 250 million years ago, produced the Siberian Traps, a huge volcanic province in Siberia. This would certainly have made the world's climate much worse, and is now thought to be the main cause of this great extinction.

All content from Kiddle encyclopedia articles (including the article images and facts) can be freely used under Attribution-ShareAlike license, unless stated otherwise. Cite this article:
Permian–Triassic extinction event Facts for Kids. Kiddle Encyclopedia.