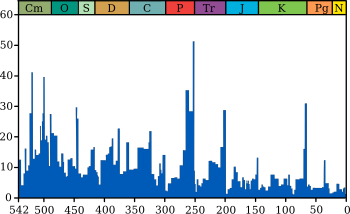 Marine extinction intensity through time. The blue graph shows the apparent percentage (not the absolute number) of marine animal genera becoming extinct during any given time interval. It does not represent all marine species, just those that are readily fossilized.

There are five major extinction events in the Phanerozoic eon, and many smaller events. In order of time, latest first:

Other extinction events in the Phanerozoic also had significant impact on the evolution of the biota.

All content from Kiddle encyclopedia articles (including the article images and facts) can be freely used under Attribution-ShareAlike license, unless stated otherwise. Cite this article:
List of extinction events Facts for Kids. Kiddle Encyclopedia.