Gravity anomaly map of the Chicxulub impact structure. The coastline is shown as a white line. A striking series of concentric features reveals the location of the crater. White dots represent water-filled sinkholes in the limestone rocks of the region.

The Chicxulub crater is more than 180 km (110 mi) in diameter, making it the third largest confirmed impact crater. The bolide which formed the crater was at least 10 km (6 mi) in diameter.

Evidence for the impact origin of the crater includes shocked quartz, a gravity anomaly, and tektites in surrounding areas. The age of the rocks and isotope analysis show that this impact structure dates from the end of the Cretaceous period, roughly 65 million years ago. The impact associated with the crater is implicated in causing the extinction of the dinosaurs.

A 2007 study suggests that the impactor may have been a piece of a much larger asteroid that broke up in a collision and also produced 298 Baptistina, 160 million years ago.

In March 2010, following analysis of the available evidence covering 20 years' worth of data in the fields of palaeontology, geochemistry, climate modelling, geophysics and sedimentology, 41 international experts from 33 institutions reviewed available evidence and concluded that the impact at Chicxulub triggered the mass extinctions during K-T boundary including those of dinosaurs.

The Chicxulub impactor had an estimated diameter of 10 km (6.2 mi) or larger, and delivered an estimated energy of 420 zettajoules (4.20E23 joules, over a billion times the energy of the atomic bombings of Hiroshima and Nagasaki). By contrast, the most powerful man-made explosive device ever detonated, the Tsar Bomba, had an energy of only 210 petajoules (2.10E17 joules, the yield of 50 megatons of TNT), making the Chicxulub impact roughly 2 million times more powerful, and thus releasing an energy equivalent of 100 petatons of TNT. 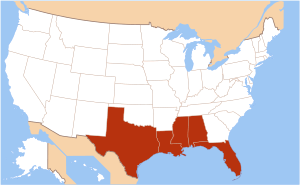 Some US states most affected by the Chicxulub megatsunami, though the coastline was different 66 million years ago

The impact would have caused a megatsunami over 100 metres (330 ft) tall that would have reached all the way to what are now Texas and Florida. The height of the tsunami was limited due to relatively shallow sea in the area of the impact; in deep sea it would be 4.6 kilometres (2.9 mi) tall. A cloud of super-heated dust, ash and steam would have spread from the crater as the impactor burrowed underground in less than a second. Excavated material along with pieces of the impactor, ejected out of the atmosphere by the blast, would have been heated to incandescence upon re-entry, broiling the Earth's surface and possibly igniting wildfires; meanwhile, colossal shock waves would have triggered global earthquakes and volcanic eruptions.

The emission of dust and particles could have covered the entire surface of the Earth for several years, possibly a decade, creating a harsh environment for living things. The shock production of carbon dioxide caused by the destruction of carbonate rocks would have led to a sudden greenhouse effect. Over a longer period, sunlight would have been blocked from reaching the surface of the Earth by the dust particles in the atmosphere, cooling the surface dramatically. Photosynthesis by plants would also have been interrupted, affecting the entire food chain.

Chicxulub is the only known Earth crater with a remaining impact peak ring, but it is under 600 m (2,000 ft) of sediment.

All content from Kiddle encyclopedia articles (including the article images and facts) can be freely used under Attribution-ShareAlike license, unless stated otherwise. Cite this article:
Chicxulub crater Facts for Kids. Kiddle Encyclopedia.