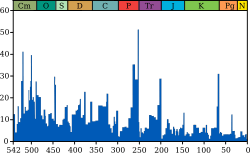 The end of the Eocene was the beginning of the Oligocene (33.9 million years ago). It is marked by a large-scale floral and faunal turnover.

Most of the affected organisms were marine or aquatic in nature. They included the last of the ancient cetaceans, the Archaeoceti.

This was a time of major climatic change, especially cooling. At first, it was not linked with any single major impact or any catastrophic volcanic event.

But volcanic activity may have caused the extinction event. Several large meteorite impacts occurred about this time. One such event caused the Chesapeake Bay impact crater 40 km (25 mi), and another at the Popigai crater 100 km (62 mi) in central Siberia, scattering debris perhaps as far as Europe. New dating of the Popigai meteor suggests it may be a cause of the mass extinction.

A leading scientific theory on climate cooling at this time predicts a decrease in atmospheric carbon dioxide, which slowly declined in the mid to late Eocene and possibly reached some threshold about 34 million years ago. This boundary is closely linked with the Oligocene Oi-1 event, an oxygen isotope change which marks the beginning of ice sheet coverage on Antarctica.

All content from Kiddle encyclopedia articles (including the article images and facts) can be freely used under Attribution-ShareAlike license, unless stated otherwise. Cite this article:
Eocene–Oligocene extinction event Facts for Kids. Kiddle Encyclopedia.