The Chesapeake Bay impact crater was formed by a bolide that impacted the eastern shore of North America about 35.5 ± 0.3 million years ago, in the late Eocene epoch. It is one of the best-preserved "wet-target" impact craters in the world.

Continued slumping of sediments over the rubble of the crater has helped shape the Chesapeake Bay.

During the warm late Eocene, sea levels were high, and the Tidewater region of Virginia lay in the coastal shallows. The shore of eastern North America, about where Richmond, Virginia is today, was covered with thick tropical rainforest, and the waters of the gently sloping continental shelf were rich with marine life that was depositing dense layers of lime from their microscopic shells. 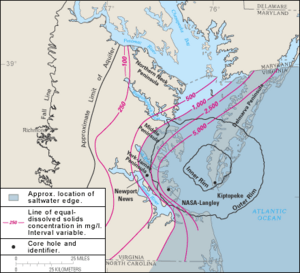 Boundaries of the crater

The bolide made impact at a speed of nearly 60 kilometers per second, punching a deep hole through the sediments and into the granite continental basement rock. The bolide itself was completely vaporized, with the basement rock being fractured to depths of 5 mi (8 km), and a peak ring being raised around it. The deep crater, 24 mi (38 km) across, is surrounded by a flat-floored terrace-like ring trough with an outer edge of collapsed blocks forming ring faults.

The entire circular crater is about 53 mi (85 km) in diameter and 0.81 mi (1.3 km) deep, an area twice the size of Rhode Island, and nearly as deep as the Grand Canyon. However, numerical modeling techniques by Collins et al. indicate that the post-impact diameter was likely to have been around 25 mi (40 km), rather than the observed 53 mi (85 km).

The surrounding region suffered massive devastation. USGS scientist David Powars, one of the impact crater's discoverers, has described the immediate aftermath: "Within minutes, millions of tons of water, sediment, and shattered rock were cast high into the atmosphere for hundreds of miles along the East Coast." An enormous megatsunami engulfed the land and possibly even reached the Blue Ridge Mountains. The sedimentary walls of the crater progressively slumped in, widened the crater, and formed a layer of huge blocks on the floor of the ring-like trough. The slump blocks were then covered with the rubble or breccia. The entire bolide event, from initial impact to the termination of breccia deposition, lasted only a few hours or days. In the perspective of geological time, the 0.75-mile (1.2 km) breccia is an instantaneous deposit. The crater was then buried by additional sedimentary beds that have accumulated during the 35 million years following the impact.

The impact has been identified as the source of the North American tektite field, namely the Georgiaite and Bediasite fields. 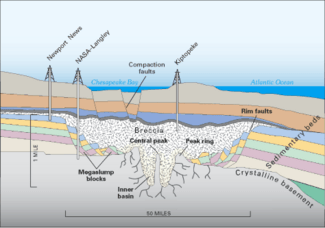 Profile view of the crater

Until 1983 there was no evidence of a large impact crater buried beneath the lower part of the Chesapeake Bay and its surrounding peninsulas. The first hint was a 8-inch-thick (20 cm) layer of ejecta found in a drilling core taken off Atlantic City, New Jersey, about 170 miles to the north. The layer contained the fused glass beads called tektites and shocked quartz grains that are unmistakable signs of a bolide impact.

In 1993, data from oil exploration revealed the extent of the crater.

The continual slumping of the rubble within the crater has affected the flow of the rivers and shaped the Chesapeake Bay. The impact crater created a long-lasting topographic depression which helped predetermine the course of local rivers and the eventual location of the Chesapeake Bay. Most important for present-day inhabitants of the area, the impact disrupted aquifers. The present freshwater aquifers lie above a deep salty brine, remnants of 100- to 145-million-year-old Early Cretaceous North Atlantic seawater, making the entire lower Chesapeake Bay area susceptible to groundwater contamination.

All content from Kiddle encyclopedia articles (including the article images and facts) can be freely used under Attribution-ShareAlike license, unless stated otherwise. Cite this article:
Chesapeake Bay impact crater Facts for Kids. Kiddle Encyclopedia.