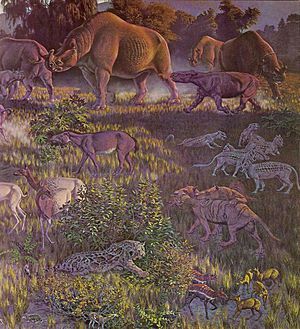 The Oligocene is the last geological epoch in the Palaeogene. It lasted for about 11 million years, from 34 mya to 23 mya. It was preceded by the Eocene and followed by the Miocene. During the Oligocene, the world continued to get cooler from its peak in the mid-Eocene. The world was still largely forested, but grasslands began to spread. Ice formed in Antarctica. The period is seen as one of transition, both in climate and in the biota.

All content from Kiddle encyclopedia articles (including the article images and facts) can be freely used under Attribution-ShareAlike license, unless stated otherwise. Cite this article:
Oligocene Facts for Kids. Kiddle Encyclopedia.