Paraceratherium is an extinct genus of mammal, a large hornless rhinoceros. It lived in Eurasia during the late Oligocene epoch of the Tertiary period, (34–23 million years ago).

Paraceratherium is one of the largest land mammal known. Its exact size is unclear because of the incompleteness of the fossils. The size of adults was about 4.8 metres (16 ft) tall, about 7.4 metres (24 ft) in length. Estimates of its weight have varied greatly. 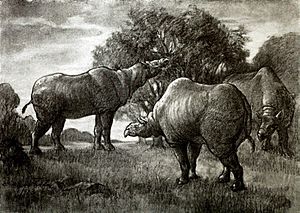 It was a herbivore that stripped leaves from trees. It had a long, low, hornless skull and long frontal and nasal bones. Its front teeth had a single pair of incisors in either jaw. They were round, pointed, and so large that they looked like small tusks. The upper incisors pointed straight downwards, while the lower ones jutted outwards. The upper lip was evidently extremely mobile. The neck was very long, the body big and strong, and the limbs long and thick, column-like. 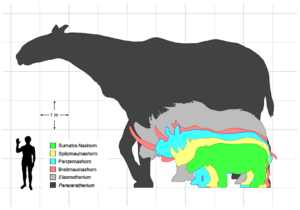 Its exact size is unclear because of the incompleteness of the fossils. Estimates have been based on skull, teeth, and limb bone measurements. However, the known bone elements are from individuals of different sizes. All skeletal reconstructions are composite extrapolations. This resulted in weight estimates from 11 to 20 tonnes. Its maximum height has been estimated as 6 metres (20 ft) at the shoulders. Its length was around 8 metres (26 ft) from front to back. As explained, such figure are only approximations. These figures are of the largest of the three species in the genus.

All content from Kiddle encyclopedia articles (including the article images and facts) can be freely used under Attribution-ShareAlike license, unless stated otherwise. Cite this article:
Paraceratherium Facts for Kids. Kiddle Encyclopedia.