One way of mapping terrestrial biomes around the world. 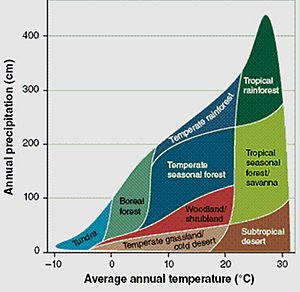 The distribution of vegetation types as a function of mean annual temperature and precipitation.

In ecology, a biome is a major regional group of distinctive plant and animal communities best adapted to the region's physical natural environment, latitude, elevation, and terrain.

A biome is made up of ecoregions or communities at stable steady state and all associated transitional, disturbed, or degraded, vegetation, fauna and soils, but can often be identified by the climax vegetation type.

The biodiversity characteristic of each biome, especially the diversity of fauna and subdominant plant forms, is a function of abiotic factors and the biomass productivity of the dominant vegetation. Terrestrial biomes with higher net primary productivity, moisture availability, and temperature.

A fundamental classification of biomes is into:

Biomes are often given local names. For example, a temperate grassland or shrubland biome is known commonly as steppe in central Asia, savanna or veld in southern Africa, prairie in North America, pampa in South America and outback or scrub in Australia. Sometimes an entire biome may be targeted for protection, especially under an individual nation's Biodiversity Action Plan.

Climate is a major factor determining the distribution of terrestrial biomes. Among the important climatic factors are:

Biodiversity generally increases away from the poles towards the equator, and increases with humidity.

The most widely used systems of classifying biomes correspond to latitude (or temperature zoning) and humidity.

In 1975, Miklos Udvardy published a system of biogeographic provinces that were divided into 12 terrestrial biomes.

Robert G. Bailey developed a biogeographical classification system for the United States in a map published in 1975. Bailey subsequently expanded the system to include the rest of North America in 1981, and the world in 1989. The Bailey system is based on climate, and is divided into four domains (Polar, Humid Temperate, Dry, and Humid Tropical), with further divisions based on other climate characteristics (subarctic, warm temperate, hot temperate, and subtropical, marine and continental, lowland and mountain).

A team of biologists developed an ecological land classification system for the World Wide Fund for Nature (WWF) that identified 14 biomes, called major habitat types, and further divided the world's land area into 867 terrestrial ecoregions. This classification is used to define the Global 200 list of ecoregions identified by the (WWF) as priorities for conservation. The WWF major habitat types are as follows:

The Endolithic biome, consisting entirely of microscopic life in rock pores and cracks, kilometers beneath the surface, has only recently been discovered and does not fit well into most classification schemes.

All content from Kiddle encyclopedia articles (including the article images and facts) can be freely used under Attribution-ShareAlike license, unless stated otherwise. Cite this article:
Biome Facts for Kids. Kiddle Encyclopedia.