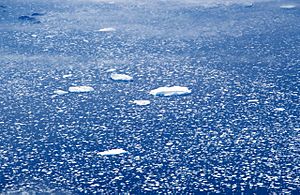 Drift ice, also called brash ice, is sea ice that is not attached to the shoreline or any other fixed object (shoals, grounded icebergs, etc.). Unlike fast ice, which is "fastened" to a fixed object, drift ice is carried along by winds and sea currents, hence its name. When drift ice is driven together into a large single mass (>70% coverage), it is called pack ice. Wind and currents can pile up that ice to form ridges up to several metres in height. These represent a challenge for icebreakers and offshore structures operating in cold oceans and seas.

Drift ice can exert tremendous forces when rammed against structures, and can shear off rudders and propellers from ships and strong structures anchored to the shore, such as piers. These structures must be retractable or removable to avoid damage. Similarly, ships can get stuck between drift ice floes.

Seasonal ice drift in the Sea of Okhotsk by the northern coast of Hokkaidō, Japan, has become a tourist attraction, and is one of the 100 Soundscapes of Japan. The Sea of Okhotsk is the southernmost area in the Northern Hemisphere where drift ice may be observed.

All content from Kiddle encyclopedia articles (including the article images and facts) can be freely used under Attribution-ShareAlike license, unless stated otherwise. Cite this article:
Drift ice Facts for Kids. Kiddle Encyclopedia.