Sea of Okhotsk facts for kids

The Sea of Okhotsk is a marginal sea of the western Pacific Ocean. It is between the Kamchatka Peninsula on the east, the Kuril Islands on the southeast, the island of Hokkaidō to the south, the island of Sakhalin along the west, and a long stretch of eastern Siberian coast (including the Shantar Islands) along the west and north. The northeast corner is Shelikhov Gulf. It is named after Okhotsk, the first Russian town in the Far East.

Shiretoko National Park on the Sea of Okhotsk coast of Hokkaido, Japan

In winter, travelling on the Sea of Okhotsk becomes difficult, or even impossible, due tolarge ice floes.

Except for Hokkaidō, one of the Japanese home islands, the sea is surrounded on all sides by land of the Russian Federation. For this reason, it is generally said to be part of Russia.

Some of the Sea of Okhotsk's islands are quite large. These include Japan's second largest island, Hokkaidō, as well as Russia's largest island, Sakhalin. Iony Island is the only island in open waters. It belongs to the Khabarovsk Krai of the Russian Federation. Most of the sea's islands are have no people making them ideal breeding grounds for seals, sea lions, seabirds, and other sea island fauna. 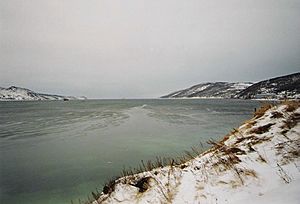 All content from Kiddle encyclopedia articles (including the article images and facts) can be freely used under Attribution-ShareAlike license, unless stated otherwise. Cite this article:
Sea of Okhotsk Facts for Kids. Kiddle Encyclopedia.