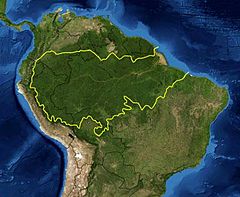 A location map of the Amazon Rainforest ecoregions. The yellow line is the border of the ecoregions defined by the World Wide Fund for Nature.

An ecoregion (ecological region), sometimes called a bioregion, is the next smallest ecologically and geographically defined area beneath "realm" or "ecozone". Ecoregions cover relatively large area of land or water, and contain characteristic, geographically distinct natural communities and species. When defined by the World Wide Fund for Nature (WWF), the boundaries of an ecoregion approximate the original extent of the natural communities prior to any major recent disruptions or changes. The WWF has identified 825 terrestrial ecoregions, and approximately 450 freshwater ecoregions across the Earth.

World Wide Fund for Nature's full definition of an ecoregion, which is widely accepted and used, is the following:

(a) share a large majority of their species and ecological dynamics;
(b) share similar environmental conditions, and;
(c) interact ecologically in ways that are critical for their long-term persistence.

The Global 200 is the list of ecoregions identified by the World Wide Fund for Nature (WWF) as priorities for conservation.

A terrestrial ecoregion is a certain area of land which is different from the area near it. It has a distinct climate, geology, type of soil, water availability, and distinct living species (the animals and plants that live in the ecoregion).

For example, one ecoregion can be a desert. It would have sand, very little water, very hot temperatures during the day and very cold at night. The plants could be just bushes, small trees, cactii. The animals could be scorpions, little mammals, spiders.

Or for example, an ecoregion could be a tropical forest It would have warm temperatures all day, a lot of rainfall all year, a huge river crossing, and a very organic soil. The plants could be huge trees or ferns. The animals could be insects, birds, fish and apes.

Marine ecoregions are regions of the world's oceans, that are defined by the WWF, to help activities for saving marine ecosystems.

The classification of Marine ecoregions is not developed to the same level of detail and comprehensiveness as that of the terrestrial ecoregions; only the priority conservation areas of the Global 200 are listed.

Several freshwater ecoregions are listed in the Global 200, the WWF's priority ecoregions for conservation of biodiversity.

All content from Kiddle encyclopedia articles (including the article images and facts) can be freely used under Attribution-ShareAlike license, unless stated otherwise. Cite this article:
Ecoregion Facts for Kids. Kiddle Encyclopedia.