A cold seep (sometimes called a cold vent) is an area of the ocean floor where hydrogen sulfide, methane and other hydrocarbon-rich liquids leak out of the Earth's crust, often in the form of a brine pool. Cold seeps form a biome supporting several native species.

Cold seeps change the shape of the ocean floor over time, where reactions between methane and seawater create carbonate rock formations and reefs. These reactions may change when bacteria are present. 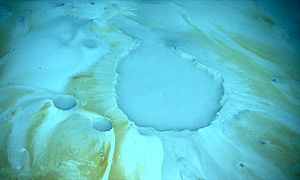 These craters mean a brine pool has formed here. Salt from brine pools seeps through the seafloor and covers the nearby rock.

Cold seeps occur over cracks in the seafloor caused by the movement of the Earth's crust. Oil and methane "seep" out of those cracks, get dissolved by tiny bits of rock, and emerge over an area several hundred meters wide.

Methane (CH4) is the main part of what we commonly refer to as natural gas. But in addition to being an important energy source for humans, methane also forms the basis of a cold seep ecosystem.

All content from Kiddle encyclopedia articles (including the article images and facts) can be freely used under Attribution-ShareAlike license, unless stated otherwise. Cite this article:
Cold seep Facts for Kids. Kiddle Encyclopedia.