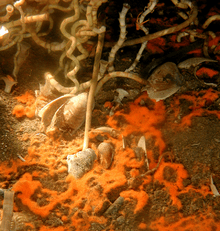 Symbiotic tubeworm Lamellibrachia luymesi from a cold seep at 550 metres in the Gulf of Mexico. In the sediments around the base are orange bacterial mats of the sulphide-oxidizing bacteria Beggiatoa. There are empty shells of clams and snails, which are also common in the seeps.

The worm forms a symbiosis with certain bacteria which can oxidise sulphides. The worm provides the bacteria with hydrogen sulphide and oxygen. It does this by taking them up from the environment and binding them to a haemoglobin molecule. In return, the bacteria feed the worm. The worms can grow to a length of about 3 metres.

Together, they form a 'biogenic habitat' by creating groups of hundreds or thousands of individuals. Living in these aggregations are over a hundred different species of organism, many of which are found only at these seeps.

Cold seeps and hydrothermal vents are the only known communities that do not rely on photosynthesis for food and energy production. Unlike hydrothermal vents, which are short-lived environments, cold seeps leak oil and gas slowly. Probably because of the cooler temperatures and stability, many cold seep organisms are much longer-lived than those inhabiting hydrothermal vents. These worm grow very slowly, but can reach lengths of over 10 feet (3 metres). This means individuals may live over 250 years.

All content from Kiddle encyclopedia articles (including the article images and facts) can be freely used under Attribution-ShareAlike license, unless stated otherwise. Cite this article:
Lamellibrachia Facts for Kids. Kiddle Encyclopedia.