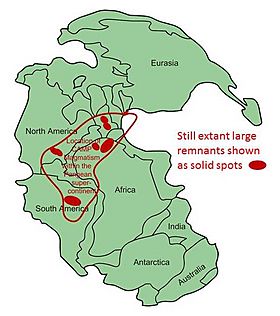 The area as it was then

The Central Atlantic magmatic province (CAMP) is the result of a huge volcanic outburst which started at the end of the Triassic period.

It is the Earth's biggest continental large igneous province, with an area of about 11 million km2. It is mainly of basalt, and formed before the breakup of Pangaea in the Mesozoic Era. It may have caused the end-Triassic extinction event.

The subsequent breakup of Pangaea created the Atlantic Ocean and provided a legacy of basaltic dikes, sills, and lavas over a vast area around the present central North Atlantic Ocean.hi

All content from Kiddle encyclopedia articles (including the article images and facts) can be freely used under Attribution-ShareAlike license, unless stated otherwise. Cite this article:
Central Atlantic magmatic province Facts for Kids. Kiddle Encyclopedia.