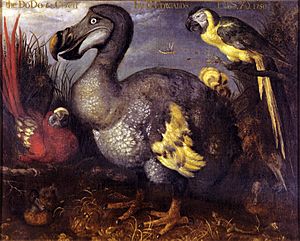 The dodo is a bird that became extinct because of humans.

The Holocene extinction is, first of all, the extinction of nearly all large mammal species after the end of the ice age. This is attributed to hunting by humans, and climate change.

Habitat destruction and over-harvesting are two of the primary causes which drive species extinct in more recent times. The fundamental cause of this is the huge increase in human population since the agricultural revolution.

Forests and natural habitats have been greatly reduced throughout the world, and this has been the cause of many extinctions.

All content from Kiddle encyclopedia articles (including the article images and facts) can be freely used under Attribution-ShareAlike license, unless stated otherwise. Cite this article:
Holocene extinction Facts for Kids. Kiddle Encyclopedia.