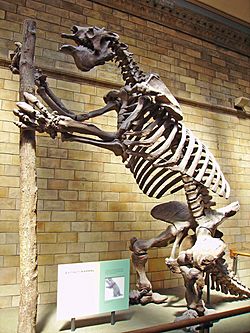 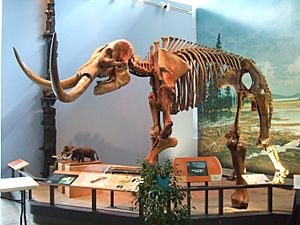 The term is most used for the Pleistocene megafauna – the large land animals of the last ice age, such as mammoths. It is also used for the largest living wild land animals, especially elephants, giraffes, hippopotamus, rhinoceros, elk, condors, etc.

Its use is connected with the discussion about the Holocene extinctions after the ice age. Most of the large land animals which were alive 12,000 years ago are now extinct, and there is much discussion as to what has caused this. The two main theories are hunting by humans, and climate change. Together, these reasons are enough to explain why these previously successful animals are now extinct. Elephant birds on Madagascar were certainly hunted to extinction, as were the Moas in New Zealand. Archaeological sites with evidence of moa hunting are all over New Zealand. The moas became extinct about five hundred years ago. The moas had survived being hunted by Haast's Eagle, but they did not survive being hunted for food by the Maoris.

For many others the climate changes may have been the main reason for their extinction.

All content from Kiddle encyclopedia articles (including the article images and facts) can be freely used under Attribution-ShareAlike license, unless stated otherwise. Cite this article:
Megafauna Facts for Kids. Kiddle Encyclopedia.