The Haast's eagle (Harpagornis moorei) was the largest eagle ever to have lived. It is the only eagle in the world ever to have been top predator of its ecosystem. It lived on the South Island of New Zealand, where there were no other large predators.

Fossil evidence shows that the areas where the Haast’s eagle lived were covered in forest and shrublands, as well as in the grasslands on river floodplains.

The arrival of people in New Zealand had unfortunate consequences for the eagle. By 1400 AD, most of the forest habitat it used had been cleared by fire, and most of the large flightless moas that it ate had been hunted to extinction.

Haast's eagles were one of the largest known true raptors. In length and weight, Haast's eagle was even larger than the largest living vultures. Another giant eagle from the fossil record, Amplibuteo woodwardi, is more recently and scantly-described but rivaled the Haast's in at least the aspect of total length. Female eagles were significantly larger than males. Most estimates place the female Haast eagles in the range of 10–15 kg (22–33 lb) and males around 9–12 kg (20–26 lb).

A comparison to living eagles of the Australasian region resulted in estimated masses in Haast's eagles of 11.5 kg (25 lb) for males and 14 kg (31 lb) for females. One source estimates that the largest females could have scaled more than 16.5 kg (36 lb) in mass. The largest extant eagles, none of which are verified to exceed 9 kg (20 lb) in a wild state, are about forty percent smaller in body size than Haast's eagles. 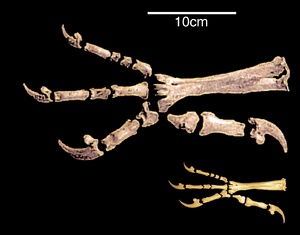 A comparative morphology of Haast's eagle with its closest living relative, the little eagle.

They had a relatively short wingspan for their size. It is estimated that the grown female typically spanned up to 2.6 m (8.5 ft), possibly up to 3 m (9.8 ft) in a few cases. This wingspan is broadly similar to the larger range of female size in some extant eagles: the wedge-tailed eagle (Aquila audax), golden eagle (A. chrysaetos), martial eagle (Polemaetus bellicosus) and Steller's sea eagle (Haliaeetus pelagicus) are all known to exceed 2.5 m in wingspan. Several of the largest extant Old World vultures, if not in mean mass or other linear measurements, probably exceed Haast's eagle in average wingspan as well.

Short wings may have aided Haast's eagles when hunting in the dense scrubland and forests of New Zealand. Haast's eagle has sometimes been portrayed incorrectly as having evolved toward flightlessness, but this is not so. Rather it represents a departure from the mode of its ancestors' soaring flight, toward higher wing loading and the species probably had very broad wings.

While most bones studied have been internal ones, some remains of Haast's eagles allow people to make comparisons to living eagles. The harpy eagle (Harpia harpyja) and the Philippine eagle (Pithecophaga jefferyi), which are the largest and most powerful living eagles alongside the Steller's sea eagle, also have similarly reduced relative wing-length in adaptation to forest-dwelling. A lower mandible from the Haast's eagle measured 11.4 cm (4.5 in) and the tarsus in several Haast's eagle fossils has been measured from 22.7 to 24.9 cm (8.9 to 9.8 in). In comparison, the largest beaks of eagles today (from the Philippine and the Steller's sea eagle) reach a little more than 7 cm (2.8 in); and the longest tarsal measurements (from the Philippine and the Papuan eagle) top out around 14 cm (5.5 in).

The talons of the Haast's eagle were similar in length to those of the harpy eagle, with a front-left talon length of 4.9 to 6.15 cm (1.93 to 2.42 in) and a hallux-claw of possibly up to 11 cm (4.3 in). The Philippine eagle might be a particularly appropriate living species to compare with the Haast's eagle, because it too evolved in an insular environment from smaller ancestors (apparently basal snake eagles) to island gigantism in the absence of large carnivorous mammals and other competing predators.

The strong legs and massive flight muscles of these eagles would have enabled the birds to take off with a jumping start from the ground, despite their great weight. The tail was almost certainly long, in excess of 50 cm (20 in) in female specimens, and very broad. This characteristic would compensate for the reduction in wing area by providing additional lift. Total length is estimated to have been up to 1.4 m (4 ft 7 in) in females, with a standing height of approximately 90 cm (2 ft 11 in) tall or perhaps slightly greater. 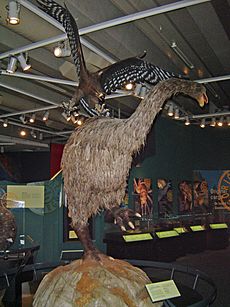 A model on display at Te Papa of a Haast's eagle attacking a moa with its large talons.

Haast's eagles preyed on large, flightless bird species, including the moa, which was up to fifteen times the weight of the eagle. It is estimated to have attacked at speeds up to 80 km/h (50 mph),.

Its size and weight indicate a bodily striking force equivalent to a concrete block falling from the top of an eight-story building. Its large beak also could be used to rip into the internal organs of its prey and death then would have been caused by blood loss. In the absence of other large predators or scavengers, a Haast's eagle easily could have monopolised a single large kill over a number of days.

Until recent human colonisation that introduced rodents and cats, the only land mammals found on the islands of New Zealand were three species of bat. Free from terrestrial mammalian competition and predatory threat, birds occupied or dominated all major niches in the New Zealand animal ecology because there were no threats posed to their eggs and chicks by small terrestrial animals. Moa were grazers, functionally similar to deer or cattle in other habitats, and Haast's eagles were the hunters who filled the same niche as top-niche mammalian predators, such as tigers or lions.

Early human settlers in New Zealand (the Māori arrived around the year 1280) preyed heavily on large flightless birds, including all moa species, eventually hunting them to extinction by around 1400. The loss of its primary prey caused the Haast's eagle to become extinct at about the same time.

A noted explorer, Charles Edward Douglas, claims in his journals that he had an encounter with two raptors of immense size in Landsborough River valley (probably during the 1870s), and that he shot and ate them; but they may have been Eyles' harriers.

All content from Kiddle encyclopedia articles (including the article images and facts) can be freely used under Attribution-ShareAlike license, unless stated otherwise. Cite this article:
Haast's eagle Facts for Kids. Kiddle Encyclopedia.