The Philippine eagle, also known as the monkey-eating eagle or great Philippine eagle, is an eagle of the family Accipitridae endemic to forests in the Philippines. It has brown and white-coloured plumage, and a shaggy crest, and generally measures 86 to 102 cm (2.82 to 3.35 ft) in length and weighs 4.04 to 8.0 kg (8.9 to 17.6 lb). It is considered the largest of the extant eagles in the world in terms of length and wing surface, with Steller's sea eagle and the harpy eagle being larger in terms of weight and bulk. Among the rarest and most powerful birds in the world, it has been declared the Philippine national bird. It is critically endangered, mainly due to massive loss of habitat resulting from deforestation in most of its range. Killing a Philippine eagle is punishable under Philippine law up to 12 years in prison and heavy fines. 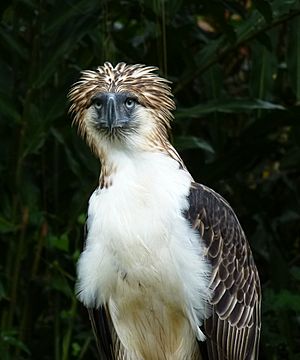 The Philippine eagle's nape is adorned with long, brown feathers that form a shaggy, manelike crest. The eagle has a dark face and a creamy-brown nape and crown. The back of the Philippine eagle is dark brown, while the underside and underwings are white. The heavy legs are yellow, with large, powerful, dark claws, and the prominent, large, high-arched, deep beak is a bluish-gray. The eagle's eyes are blue-gray. Juveniles are similar to adults except their upperpart feathers have pale fringes.

The Philippine eagle is typically reported as measuring 86–102 cm (2 ft 10 in–3 ft 4 in) in total length, but a survey of several specimens from some of the largest natural history collections in the world found the average was 95 cm (3 ft 1 in) for males and 105 cm (3 ft 5 in) for females. Based on the latter measurements, this makes it the longest extant species of eagle, as the average for the female equals the maximum reported for the harpy eagle and Steller's sea eagle. The longest Philippine eagle reported anywhere and the longest eagle outside of the extinct Haast's eagle is a specimen from Field Museum of Natural History with a length of 112 cm (3 ft 8 in), but it had been kept in captivity so may not represent the wild individuals due to differences in the food availability.

The most frequently heard noises made by the Philippine eagle are loud, high-pitched whistles ending with inflections in pitch. Additionally, juveniles have been known to beg for food by a series of high-pitched calls.

The Philippine eagle is endemic to the Philippines and can be found on four major islands: eastern Luzon, Samar, Leyte, and Mindanao. The largest numbers of eagles reside on Mindanao, with between 82 and 233 breeding pairs. Only six pairs are found on Samar, two on Leyte, and a few on Luzon. It can be found in Northern Sierra Madre National Park on Luzon and Mount Apo, Mount Malindang, and Mount Kitanglad National Parks on Mindanao. 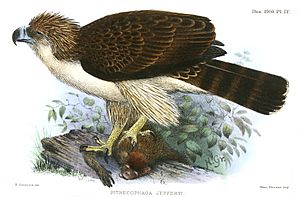 Evolution in the Philippine islands, without other predators, made the eagles the dominant hunter in the Philippine forests. Each breeding pair requires a large home range to successfully raise a chick, thus the species is extremely vulnerable to deforestation. Earlier, the territory has been estimated at about 100 km2 (39 sq mi), but a study on Mindanao Island found the nearest distance between breeding pairs to be about 13 km (8.1 mi) on average, resulting in a circular plot of 133 km2 (51 sq mi).

The species' flight is fast and agile, resembling the smaller hawks more than similar large birds of prey.

Juveniles in play behavior have been observed gripping knotholes in trees with their talons, and using their tails and wings for balance, inserting their heads into tree cavities. Additionally, they have been known to attack inanimate objects for practice, as well as attempt to hang upside down to work on their balance. As the parents are not nearby when this occurs, they apparently do not play a role in teaching the juvenile to hunt.

Prey specimens found at the eagle's nest have ranged in size from a small bat weighing 10 g (0.35 oz) to a Philippine deer weighing 14 kg (31 lb). The primary prey varies from island to island depending on species availability, particularly in Luzon and Mindanao, because the islands are in different faunal regions. For example, the tree squirrel-sized Philippine flying lemurs, the preferred prey in Mindanao, are absent in Luzon. The primary prey for the eagles seen in Luzon are monkeys, birds, flying foxes, giant cloud-rats Phloeomys pallidus (which can weigh twice as much as flying lemurs at 2 to 2.5 kg (4.4 to 5.5 lb)), and reptiles such as large snakes and lizards. The flying lemur could make up an estimated 90% of the raptor's diet in some locations. While the eagles generally seem to prefer flying lemurs where available, most other animals found in the Philippines, short of adult ungulates and humans, may be taken as prey. This can include Asian palm civets (12% of the diet in Mindanao), macaques, flying squirrels, tree squirrels, fruit bats, rats, birds (owls and hornbills), reptiles (snakes and monitor lizards), and even other birds of prey. They have been reported to capture young pigs and small dogs.

Philippine eagles primarily use two hunting techniques. One is still-hunting, in which it watches for prey activity while sitting almost motionlessly on a branch near the canopy. The other is perch-hunting, which entails periodically gliding from one perch to another. While perch-hunting, they often work their way gradually down from the canopy on down the branches, and if not successful in finding prey in their initial foray, they fly or circle back up to the top of the trees to work them again. 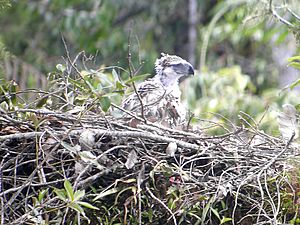 The complete breeding cycle of the Philippine eagle lasts two years. Like most eagles, the Philippine eagle is monogamous. Once paired, a couple remains together for the rest of their lives. If one dies, the remaining eagle often searches for a new mate to replace the one lost.

The beginning of courtship is signaled by nest-building, and the eagle remaining near its nest. Aerial displays also play a major role in the courtship. These displays include paired soaring over a nesting territory, the male chasing the female in a diagonal dive, and mutual talon presentation, where the male presents his talons to the female's back and she flips over in midair to present her own talons. Advertisement displays coupled with loud calling have also been reported. The willingness of an eagle to breed is displayed by the eagle bringing nesting materials to the bird's nest. Copulation follows and occurs repeatedly both on the nest and on nearby perches. The earliest courtship has been reported in July.

Breeding season is in July; birds on different islands, most notably Mindanao and Luzon, begin breeding at different ends of this range. The amount of rainfall and population of prey may also affect the breeding season. The nest is normally built on an emergent dipterocarp, or any tall tree with an open crown, in primary or disturbed forest. The nests are lined with green leaves, and can be around 1.5 m (4.9 ft) across. The nesting location is around 30 m (98 ft) or even more above the ground. As in many other large raptors, the eagle's nest resembles a huge platform made of sticks.

The eagle frequently reuses the same nesting site for several different chicks. Eight to 10 days before the egg is ready to be laid, the female is afflicted with a condition known as egg lethargy. In this experience, the female does not eat, drinks lots of water, and holds her wings droopingly. The female typically lays one egg in the late afternoon or at dusk, although occasionally two have been reported. If an egg fails to hatch or the chick dies early, the parents likely lay another egg the following year. Copulation may take place a few days after the egg is laid to enable another egg to be laid should the first one fail. The egg is incubated for 58 to 68 days (typically 62 days) after being laid. Both sexes participate in the incubation, but the female does the majority of incubating during the day and all of it at night.

Both sexes help feed the newly hatched eaglet. Additionally, the parents have been observed taking turns shielding the eaglet from the sun and rain until it is seven weeks old.

All content from Kiddle encyclopedia articles (including the article images and facts) can be freely used under Attribution-ShareAlike license, unless stated otherwise. Cite this article:
Philippine eagle Facts for Kids. Kiddle Encyclopedia.