Destruction of its natural habitat has caused it to vanish from many parts of its former range, and it is nearly eliminated in Central America. In Brazil, the harpy eagle is also known as the royal-hawk. The species name harpyja and the word harpy in the common name harpy eagle both come from Ancient Greek. They refer to the Harpies of Ancient Greek mythology. These were wind spirits that took the dead to Hades, and were said to have a body like an eagle and the face of a human.

The harpy eagle is found from Mexico (almost extinct), through Central America and into South America to as far south as Argentina. In rain-forests, they live in the tallest layer of the forest. The eagle is most common in Brazil, where it is found across the entire national territory. With the exception of some areas of Panama, the species is almost extinct in Central America, due to the logging of much of the rainforest there. Within the rainforest, they hunt in the canopy or sometimes on the ground, and perch on tall trees looking for prey. 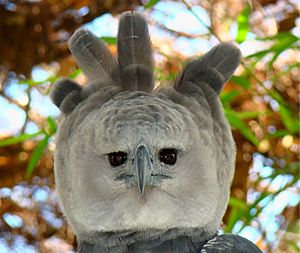 The upper side of the harpy eagle is covered with slate-black feathers, and the underside is mostly white, except for the feathered tarsi, which are striped black. A broad black band across the upper breast separates the gray head from the white belly. The head is pale grey, and is crowned with a double crest. The upper side of the tail is black with three gray bands, while the underside of it is black with three white bands. The iris is gray or brown or red, the base of the upper beak and bill are black or blackish and the toes are yellow. The plumage of males and females are identical.

It is sometimes referred to as the largest eagle alongside the Philippine eagle. The wingspan of the harpy eagle is relatively small, an adaptation that increases its quality of moving freely in forested habitats. 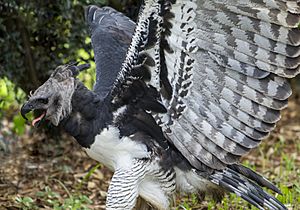 This species is largely silent away from the nest. There, the adults give a penetrating, weak, gloomy scream, with the nesting males' call described as "whispy screaming or wailing". The females' calls while nesting are similar, but are lower-pitched. While approaching the nest with food, the male calls out "rapid chirps, goose-like calls, and occasional sharp screams". Vocalization in both parents decreases as the nestlings age, while the nestlings become more vocal. The nestlings call chi-chi-chi...chi-chi-chi-chi, seemingly in alarm in response to rain or direct sunlight. When humans approach the nest, the nestlings have been described as uttering croaks, quacks, and whistles. 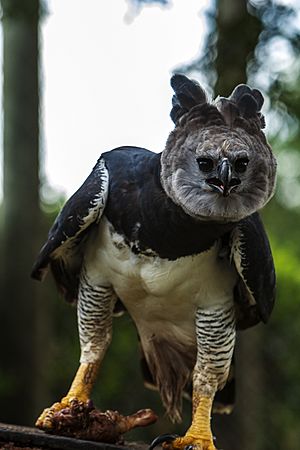 Adults are near or even at the top of the food chain and are rarely preyed on. Its main prey are tree-dwelling mammals and a majority of the diet has been shown to be on sloths and monkeys. The eagle may also attack bird species such as macaws, other parrots have also been preyed on. Additional prey reported include, reptiles such as iguanas, tegus, and snakes. A recent list a total of 102 prey species. The eagle has been recorded as taking domestic livestock, including chickens, lambs, goats, and young pigs, but this is extremely rare under normal circumstances. They help control the population of mesopredators, such as Capuchin monkeys which prey on bird's eggs and which (if not naturally controlled) may cause local extinctions of sensitive species. 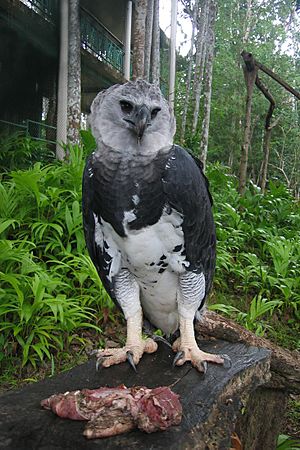 They possess the largest talons of any living eagle. They have been recorded as lifting prey up to equal their own body weight. That allows the birds to snatch a live sloth from tree branches, as well as other huge prey items. Adult female harpies regularly grab large male howler or spider monkeys or mature sloths weighing 6 to 9 kg (13 to 20 lb) in flight and fly off without landing, an enormous feat of strength.

Sometimes, harpy eagles are "sit-and-wait" predators (common in forest-dwelling raptors). In harpies, this consists of perching and watching for long times from a high perch near an opening, a river, or a salt-lick (where many mammals go to feed for nutrients). The more common hunting technique of the species is perch-hunting, which consists of scanning around for prey activity while briefly perched between short flights from tree to tree. When prey is spotted, the eagle quickly dives and grabs the prey. On occasion, they may also hunt by flying within or above the canopy. 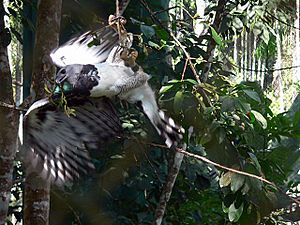 The harpy often builds its nest in the crown of the kapok tree, one of the tallest trees in South America. In many South American cultures it is considered bad luck to cut down the kapok tree, which may help safeguard the habitat of this stately eagle. The bird also uses other huge trees to build its nest on, such as the Brazil nut tree. 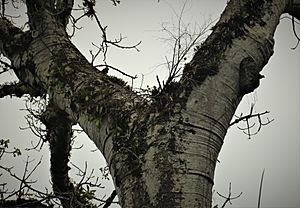 A pair of Harpy Eagles lays two white eggs in a large stick nest high in a tree, and raise one chick every 2–3 years. After the first chick hatches, the second egg is ignored and fails to hatch. The male captures much of the food for the nesting female and later the eaglet, but also takes on nesting shifts while the female searches for food to bring back to the nest.

The chick develops wing feathers that are large enough for flight in 6 months, but the parents continue to feed it for another 6 to 10 months. It can be aggressive toward humans who disturb its nesting sites or appear to be a threat to its young. 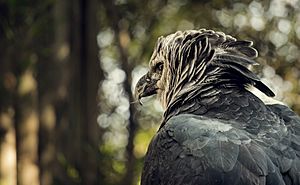 Globally, the harpy eagle is considered Near Threatened by IUCN and threatened with extinction by CITES. The Peregrine Fund until recently considered it a "conservation-dependent species", meaning it depends on a dedicated effort for captive breeding and release to the wild, as well as habitat protection, to prevent it from reaching endangered status, but now has accepted the Near Threatened status. Various initiatives for restoration of the species are in place in various countries. 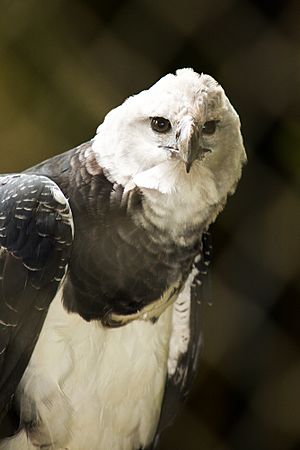 A Harpy Eagle in captivity

The harpy eagle is considered critically endangered in Mexico and Central America, where it has been eliminated in most of its former area; in Mexico, it used to be found as far north as Veracruz, but today probably occurs only in Chiapas in the Selva Zoque. It is considered as Near Threatened or Vulnerable in most of the South American portion of its area; at the southern extreme of its range, in Argentina, it is found only in the Parana Valley forests at the province of Misiones. It has disappeared from El Salvador, and almost so from Costa Rica.

The harpy eagle is the national bird of Panama and is depicted on the coat of arms of Panama. The 15th harpy eagle released in Belize, named "Hope", was dubbed "Ambassador for Climate Change", in light of the United Nations Climate Change Conference 2009. The harpy eagle was the inspiration behind the design of Fawkes the Phoenix in the Harry Potter film series.

All content from Kiddle encyclopedia articles (including the article images and facts) can be freely used under Attribution-ShareAlike license, unless stated otherwise. Cite this article:
Harpy eagle Facts for Kids. Kiddle Encyclopedia.